Teradyne, Inc. announced the acquisition of privately held MiR of Odense, Denmark for US$148 million net of cash acquired plus US$124 million at the current exchange rate, if certain performance targets are met extending through 2020.

Hannover Messe, one of the world’s leading industrial fairs, comes to a close today after an exciting week.

Robotiq was there too!

“Cobot engineers and businesses need to start thinking about how to create a more compatible relationship between human and mechanized workers,” Manufacturing.Net reported. “Building collaborative hybrid cobot-human teams will be essential for manufacturers moving forward.”

As workforces age in Japan and elsewhere, cobots “are seen as a key way to help keep all types of assembly lines moving without replacing humans.” (Reuters)

The Telegraph’s 30 minute “Technology Intelligence” podcast looked at “The Future of Work”.

Researchers at the University of Stuttgart, Germany created this ‘Collaborative Robotic Workbench.’ The system is designed to augment the capabilities of “builders by giving them access to digital information and robotic control, facilitating a collaborative robotic building process”… 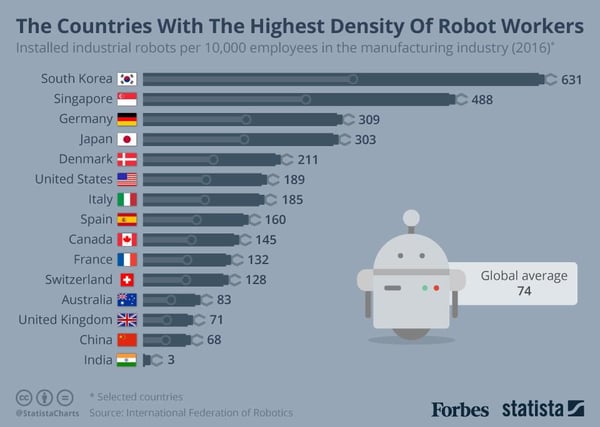 Startup Tapster was profiled in American Inno. The firm makes robots that can be used to help quality control and testing of touchscreens…

ABB and the Economist launched the Automation Readiness Index, which provides a ranking for 25 countries based on their readiness for robotics and AI. According to the Index, South Korea, Germany and Singapore are the world’s top-ranked nations “in their preparations for smoothly integrating intelligent automation into their economies.”

According to numerous reports, online retail giant Amazon is working on a domestic service robot under the codename, “Vesta.” with device trials starting employee homes later this year. Amazon reportedly has plans to launch Vesta to consumers as soon as 2019.

Angelique Taylor, a PhD student in the Healthcare Robotics Lab at UC San Diego, spoke about her research into human-robot interaction. Taylor is particularly interested in helping robots understand the physical and social dynamics of groups of people in social environments…

“Robots that can weld, lift and bolt are being developed to help bridge labor shortages at Japanese construction sites, though their use will be limited to night shifts when no human workers will be nearby due to safety and regulatory concerns,” ABC news reported.

The cleanup job at Fukushima will take decades and is “no job for humans,” Vince Beiser wrote in a fascinating long feature for Wired.

Roboticists from the University of Tokyo and Kyushu Institute of Technology have developed an autonomous maritime robot that can detect and collect samples of seafloor life. (Japan Times) 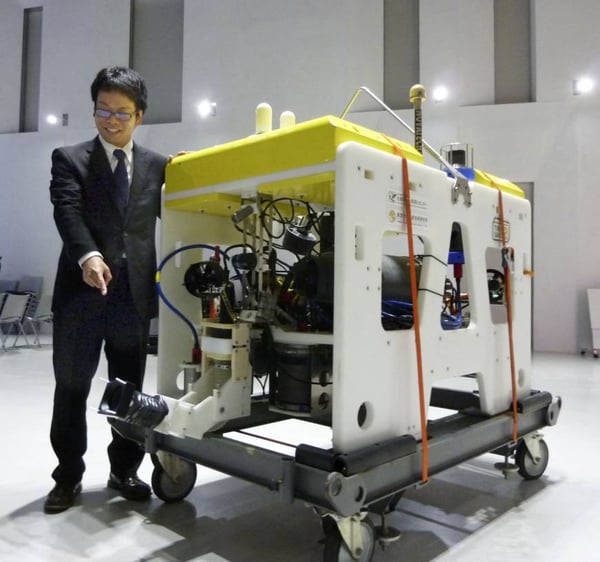 Caption: The robot was shown to the media in Tokyo on Tuesday. | KYODO

1. Engineers and marine biologists at the University of California have created a virtually transparent, foot-long, eel-like robot that can swim silently in salt water using artificial muscles filled with water to propel itself.

2. Cassie, the bipedal bot developed by Jessy Grizzle’s Lab at the University of Michigan spent some time walking through a ring of fire. Shamanic ritual or safety test? Nobody knows.

4. Adrian Cartland, сreator of Ailira (Artificially Intelligent Legal Information Research Assistant) spoke about robot citizenship and shared his insights about AI legal status as well as “robot citizenship, its implications, and how governments could deal with it.”