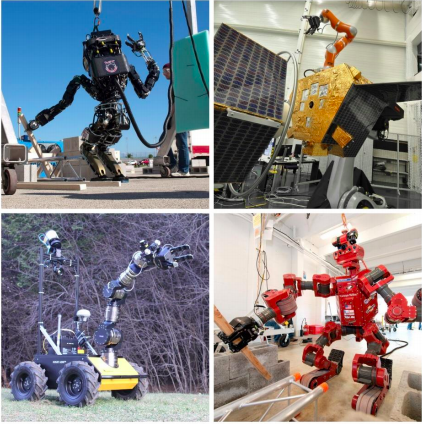 Robotiq provides a treasure trove of information to robotics developers and manufacturers, but it’s also known for its Adaptive Robot Grippers, which have been used in countless R&D projects. To chronicle some of these cutting-edge projects, an eBook was launched – and it was recently updated to include even more examples.

Join us today as we look at this eBook and the projects it covers. If you’re interested in reading the book in its entirety, be sure to check out the eBook marketplace on Robotiq’s website.

Some of the projects that have made use of the Robotiq 3-Finger Gripper.

The first project is DARPA’s Robotics Challenge. Several teams chose the Robotiq 3-Finger-Adaptive-Robot-Gripper for their robot. This was the ideal tool because it gave them flexibility and a robust selection of automated capabilities.

Next up is the RoboGasInspector Project. This project uses Robotiq’s flexible grippers to make quick adjustments, along with various sensors to detect leaks. The robot itself can run in both automonous and teleoperated modes. The arm was also equipped with a flexible gripper so it could make minor changes to the environment without the need to put a human in danger.

The third project is from Clearpath Robotics. They used a 3-finger adaptive robot gripper mounted on a 7-DOF Schunk arm. The arm and gripper are used to accommodate a wide range of shapes and sizes.

Next is the CHARM project, where the goal is to use intelligent robotic assistants to collaborate with human workers. This project used the 3-Finger Adaptive Robot Gripper combined with a 3D camera to detect people’s gestures in order to follow their commands. The Robotiq gripper ensured that parts could be delivered to workers quickly and efficiently.

The GOLEM Project at GeorgiaTech’s robotics lab aims to build humanoid robots that are capable of reasoning about the properties of objects within their environment and autonomously completing certain tasks. They chose the Robotiq 3-Finger Adaptive Robot Gripper because of its flexible and rugged design. These robots are used in different environments, so flexibility was key.

Another highlight is the Johns Hopkins University robot, where researchers have used cutting-edge visual technology to create a natural Immersive Virtual Robotics Environment.

This allows the user to instruct, collaborate, and interact with robotic systems in simulations and in real-time via a virtual proxy. Their robot uses the 2-finger 85 Adaptive Robot Gripper from Robotiq to enable flexible manipulation.

Finally, another project we’d like to highlight is the robotics R&D at Copperstone Technologies. They created a robot to deal with tailing ponds, which is where waste is laid out from oil and eventually becomes sludge. It’s not safe for people to work in this kind of environment, so a robot was built to navigate the environment and take samples.

The FT 300 Force Torque Sensor from Robotiq was used in this robot to measure the density of materials. The sensor can be used to tell the difference between water and tailings, and can also provide data on the makeup of the ground being excavated.

All of these projects, and more, can be found in Robotiq’s free eBook. Have you read it? What about the updated version? Let us know in the comments!