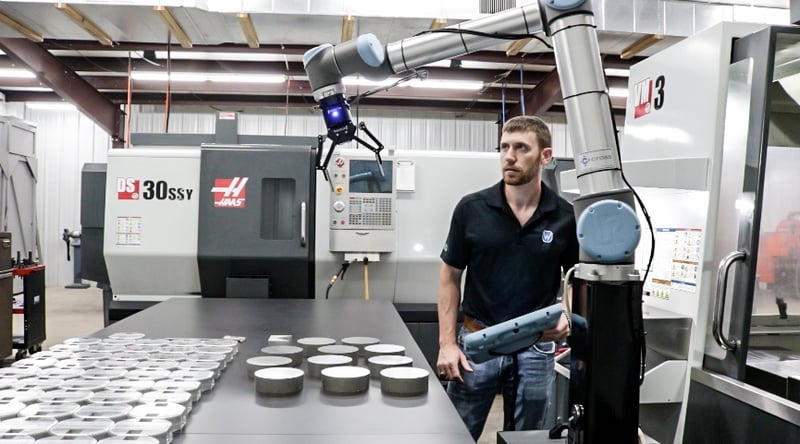 Robots are expensive, right? Not if you deploy them correctly! Here are two ways to deploy robots on a budget … but only one actually works.

People often say to us: “We haven’t got enough money to invest in robotics right now.”

We understand, budgets are tight. It’s hard to think about buying a robot when there are so many other areas of your business need investment too. People think of automation as a “big bucks” investment. They can’t see how they could fit robots into their tight budgets.

But, adding a robot doesn’t have to mean a big investment. You can get started with robotics on a shoestring budget and see a return on investment very quickly.

…and this is where people sometimes fall down. They try to deploy robots “on the cheap” and it blows up in their face.

There are at least two ways to deploy your first robot when your budget is tight… and only one of them really works.

The 2 ways to deploy your first robot on a budget

When we’re strapped for cash, we often look for any way we can to save money. Here are two fictional stories describing common situations that people try to use when deploying a robot on a budget.

The unexpectedly costly way (aka try to do it Alone)

If you’re a technical person like I am, it’s tempting to save money on a deployment by trying to do everything yourself. Sometimes this works fine, other times it turns out like this:

Helen Rains is the lead engineer in machine shop Dranigan Engineering Ltd. She’s annoyed because she spends almost all of her time tending the CNC milling machine and not enough time on more value-added activities.

She gets the idea to add a robot to tend the machine so she immediately calls up some local robot distributors, but their limited options are all too expensive for her tiny budget. Her boss says that a local manufacturer is selling off one of their old industrial robots for cheap and tells her to buy it, but it still costs almost all of her assigned budget. Helen says she can integrate the robot herself with her programming knowledge.

The robot arrives and she sets it up herself. But, the teach pendant interface is old, clunky and unfamiliar. Programming is slow. She eventually manages to program the robot to tend the CNC machine, but only for one type of part setup at a time. The machine needs quick changeovers and it takes her a whole day to reprogram the robot for a new type of part. The integration work is now seriously affecting her ability to meet customer orders.

In exasperation, she admits defeat and convinces her boss to hire an external integrator to create a flexible program so the robot can handle all parts which go into the machine. The integration costs a lot of money. But, in the end, the robot can handle most of their parts by changing parameters in the program.

The industrial robot works and Helen is able to spend time on more value-added tasks. However, she has spent a lot of time and energy on the robot deployment, not to mention that it went far over budget and even lost them a few customer orders. As an added problem, if they want to move the robot to another CNC machine in the future, they have to hire the integrator all over again.

What did Helen do wrong?

She tried to do absolutely everything herself! She didn’t seek help, she assumed she could do it all herself because she’s resourceful and knows how to program (I’ve done this too many times!). She didn’t even consider reaching out to robotics experts, except when it was too late. And it cost her.

The safe, swift, simple way (aka the way of the Jedi)

Robot deployment can be easy, even when you are on a budget. It’s simply a case of reaching out to the right people for a little help before you get started. Then it can turn out like this:

Luis Bennet is a quality testing engineer at electronics manufacturer ZanZern Inc. He is starting to get bored of his job because he is always loading and unloading circuit boards from the quality testing machine and doesn’t have time for more value-added activities.

He thinks robots could be an option and he does some research into robotic quality testing. He finds his way to a video on the Robotiq website of a collaborative robot being used for quality testing tasks. He investigates further and downloads a copy of our Getting Started with Cobots eBook.

When reading through the eBook, Luis realizes that a cobot would not only allow him to move to more interesting tasks, it could also improve the productivity of the quality testing process!

He uses the Blueprints online tool to enter details of his task. This schedules him a free coaching session with a member of the Robotiq team.

During the call, he talks to Catherine at Robotiq and describes his situation. She helps to clarify the task and suggests that he could use a UR10 to tend the quality testing machine.

Luis is slightly concerned that this may just a sales call. However, when Catherine dissuades him from adding an extra sensor, saying it is not necessary for his application, Luis is reassured that she is looking after the best interests of his business.

Luis worries that his boss might not be happy about investing in a cobot, even though it is a lot cheaper than an industrial robot would be. However, he uses the eBook How to Get Your Boss to Go With Cobots to prepare a solid pitch and his boss accepts the idea immediately.

When the robot arrives, Luis has a moment of panic when he realizes he will have to integrate the robot himself. However, with the help of Robotiq’s extensive video library, he has the robot up and running in no time.

The robot boosts their productivity almost immediately. It achieves a return on investment after just 6 months.

What did Luis do differently?

He reached out to the right people before doing anything else, saving him time, energy and money.

If you’re on a budget and you want to get the benefit of cobots, which way would you prefer?

Any questions? Tell us in the comments below or join the discussion on LinkedIn, Twitter, Facebook or the DoF professional robotics community.