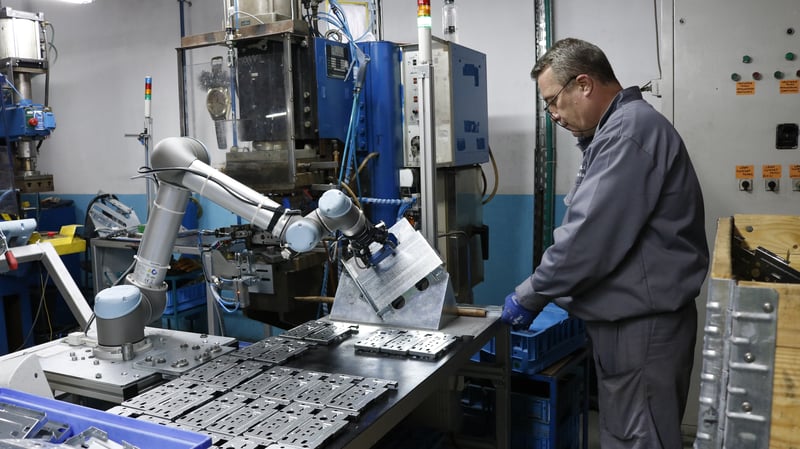 Safety first! Understand these six rules when installing or taking care of your robot.

Next-gen robots are taking the manufacturing industry by storm.

Citing growing concerns over the jobs of human workers, some manufacturers are embracing cobots — or collaborative robots — as a means of ensuring job security while still introducing robotics to the factory floor.

In either case, there are some common hazards and, as a result, some fundamental rules to follow when introducing AI-driven robots to the workplace.

At Assa Abloy, robotics expertise was built around engineers and technicians in charge of automating processes with new technologies.

Self-learning robots represent a significant advancement in robotic technology. Instead of limiting a robot based on its initial programming, next-gen robots are capable of observing their environments, monitoring the activities of others and even learning new, efficient ways of completing tasks.

It has the potential to create a whole generation of self-aware, self-learning robots — but there are some hazards to consider, too.

How do the programmers or manufacturers regulate the robot’s ability to learn? How does the robot know when it’s learned enough — and how far does its curiosity go?

Questions like these need to be answered before robots enter the mainstream.

2. Examine mechanical parts for signs of wear and tear

Mechanical failures represent a significant portion of robotics hazards in the workplace. As such, it’s important that all robots are regularly inspected for signs of damage or unnecessary wear.

Examining the robots outward appearance isn’t enough. To properly diagnose any potential issues, inspectors need to get inside the machine and examine the mechanical parts that make the device tick. Any problems here need to be addressed immediately and before production resumes.

Like nearly anything that is worth value, electronic components are sometimes faked. Considering that many robots originate overseas, where vendors and suppliers aren’t always verifiable, it’s all too easy to fall victim to such a scam.

Counterfeit electronics are also more prone to a serious malfunction or programming error. It’s a problem that’s almost impossible to detect in preassembled machines — it would require complete disassembly and reassembly.

For individual or replacement pieces, examine the label from its packaging. Look for any misspellings or errors, as these are obvious signs of a forgery or counterfeit merchandise. Authenticate parts by verifying their OCM codes and make sure the country of origin matches the country code on the part itself. While these won’t protect buyers from counterfeit parts entirely, it makes it harder to sneak one past a watchful eye.

The maintenance and installation of robots pose concerns, too. If technicians didn’t receive proper training, or if they fail to follow the safeguards of their job, serious repercussions could follow.

A robot recently malfunctioned during installation and killed one of its installers in a Volkswagen assembly plant in Germany. Although the unfortunate incident was ultimately a rare occurrence and didn’t involve any wrongdoing on behalf of the human installers, it only highlights the severity of the risks involved with industrial robots.

5. Ensure the safety of nearby workers

It’s up to individual business owners to ensure the safety of all their workers, but next-gen robots introduce some brand-new challenges. Robots are prone to malfunction — all electronics are. What happens if a machine malfunctions and injuries a nearby worker?

Not only is it important to provide human workers with training and guidelines regarding working around robots, but it’s also critical that robots are aware of their human counterparts and take necessary safety precautions whenever applicable.

It’s one thing to assign a robot to the most dangerous jobs on the factory floor, but they still need to complete the task safely.

There are already multiple examples of robot malfunctions resulting in injury or fatality. In early 2017, a robotic arm struck and killed a worker from Michigan. Avoiding problems like this in the future and minimizing the threat to human workers is the topmost priority of any workplace that combines robots with the traditional workforce.

Although errors during the initial programming or installation are often cited as concerns, human mistakes are just as costly. If an operator lacks the proper knowledge to run a robot on a day-to-day basis, or if they aren’t familiar with the proper safety protocol, a basic error could easily become a catastrophe.

Workers who attempt to apply a quick fix to a machine, for example, put themselves and others at serious risk. A passing worker who intervenes in an attempt to help their peers might end up risking their safety, too. Common human errors are responsible for a large number of avoidable incidents in the workplace.

While robots and cobots can boost productivity and efficiency in nearly any factory setting, they’re not perfect.

They’re still prone to mistakes — either as a result of erroneous programming or a basic malfunction — and they’re not all intelligent enough to differentiate an error from correctness.

By making workers aware of this fact, company owners can help mitigate the risks of working with robots.