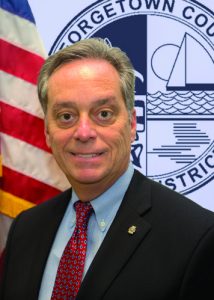 Alan Walters hopes you never have to go through the initiation to school safety that he did as the new director of safety and risk management for the Georgetown School District in South Carolina, when he faced ice storms, floods, hurricanes and snow storms in a whirlwind first four years on the job.

“[Ice storms] are unusual for coastal South Carolina and we don’t have a lot of the equipment and supplies to deal with that type of weather event,” Walters explains of his first hurdle.

Alan Walters is the director of safety and risk management at Georgetown County School District.

“We were more a user of emergency services than a provider, and that needed to change,” Walters says of the district.

The new EOP was put to use the following year when Hurricane Joaquin triggered what came to be known as the “thousand year flood.”

Georgetown County, which is divided by five rivers flowing into Winyah Bay, had communities isolated by water for weeks. The school district, working with local emergency management officials, was able to provide transportation, facilities and equipment for recovery efforts.

Buses provided rides to shelters and also helped people return to their homes. Schools were used as evacuation shelters, housing for incoming first responders and military personnel and as disaster relief centers where the public could pick up food and water.

“One area was so isolated that after the school reopened we couldn’t get buses in there to transport the students, so teachers were sent in by boat to hold classes in a church, “ Walters remembers.

There was a sense of déjà vu in 2016 when Hurricane Matthew went through the area. Schools were closed for eight days as the county recovered from the devastation.

Using the experience gained from the previous incidents, the district was able to provide support before, during and after the storm.

“We did a better job of pre-storm mitigation this time because of what we had learned,” Walters says. “We prepositioned assets, secured property and were ready to provide post-storm relief. [So things] went much more smoothly.”

By attending Alan Walter’s Campus Safety East Conference presentation Disaster! How School Districts Can Prepare for the Worst Through Collaboration and Community Partnerships, you can take advantage of his experiences to prepare your district for the disruption of weather events and find out how to integrate your safety program into the larger emergency management plans of your city or county. CSC East takes place July 18-20 in Herndon, Va. Register here.

Unfortunately, 2017 gave the Georgetown County School District reminders of both types of incidents with Hurricane Irma in September and a snow storm in late December.

“Probably the hardest decisions a school district has to make in these instances are when to shut down school and when to reopen,” Walters says. “Our experiences with previous weather events taught us it takes “boots on the ground” site surveys, conversations with emergency management and government officials, and even monitoring social media where people post information about road conditions in outlying areas to make the best possible decisions.”

Related: Test Your NIMS Knowledge With Our IS-700.A Quiz!

Walters hopes his presentation How School Districts Can Prepare for the Worst through Collaboration and Community Partnerships at Campus Safety East this summer will help other districts avoid the trial and error process of weather-related emergency management through proper planning and working with partnering agencies.