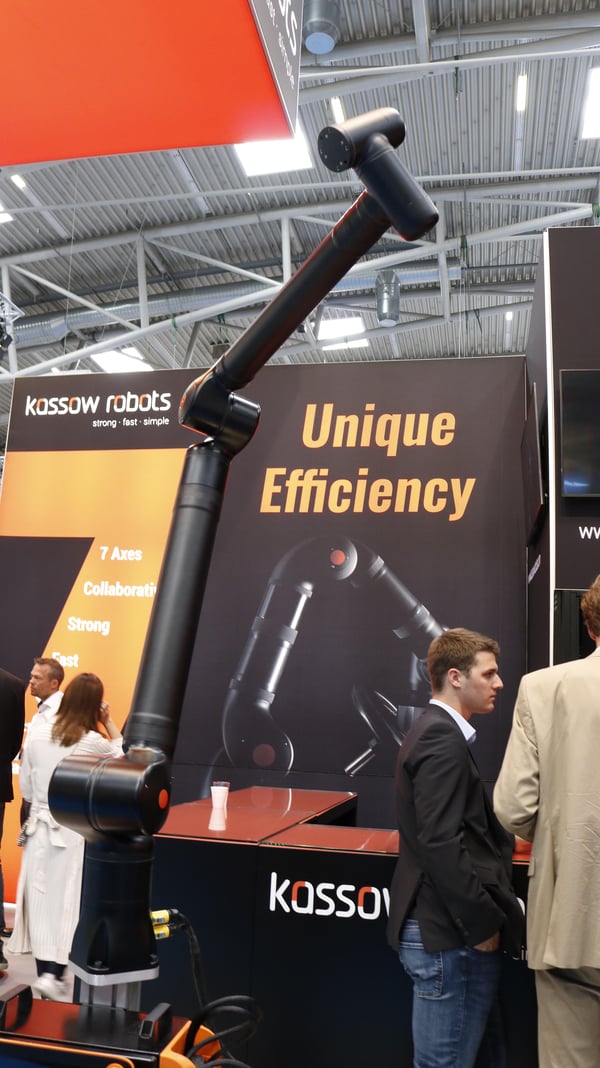 The robots are powered down, our booth is packed, and the lights at Automatica 2018 are turning off one by one. Here’s David’s video recap of our spectacular week and our top 5 takeaways from the event.

All good things — as they say — must come to an end.

And we’ve reached the end of Automatica 2018. It certainly has been good!

We have made some great connections with new people. We’ve strengthened some of the connections that we already had. And, we’ve enjoyed our visit to Munich immensely.

What will we remember most from Automatica 2018? In a moment, we’ll tell you our top 5 takeaways from the event.

But first, as we take down our booth and prepare for our journey back to Canada, let’s have a final look at our time here at Automatica 2018.

David Maltais, our communications and PR coordinator, has been working tirelessly here at Automatica. He’s responsible for many of the spectacular videos and photos that you’ve seen on our social media channels and in these live blog posts.

And here’s his recap of the whole event.

Take it away David!

Yes, we’ve certainly seen a lot over the last four days. We have also learned a lot. Automatica is not just a place to check out the latest tech. It’s also a place where you can see which robotics trends have stood the test of time. It’s where you can spot new trends that are just beginning, if you know what you’re looking for.

Here are our top 5 takeaways from Automatica this year, along with links to our live blog posts from this week.

No doubt we will think of more takeaways when we are on the plane back home. But, these are the ones we’ve thought of while Automatica is still fresh in our minds.

At the last Automatica in 2016, there was a feeling that collaborative robots were still “the new kid on the block.” This year, it’s clear that cobots are now firmly ingrained into the industrial landscape. The halls of Automatica 2018 have been filled with cobots!

There are well established cobots, like the URs that we’ve been seeing everywhere. Then, there are brand new offerings, like the 7 DoF cobots from start up Kassow Robotics that we saw on Wednesday.

Read all about it in Wednesday’s post: Aliens, Electric Cars and a Great Demo at Automatica 2018 Day 2

As we discovered on Tuesday, tiny tabletop robots seem to be the new thing. Some are sold as collaborative, such as the ABB’s single arm YuMi and Comau’s Cobotta. Others, like Yaskawa’s MotoMini and the ABB IRB120 are just tiny industrial robots. 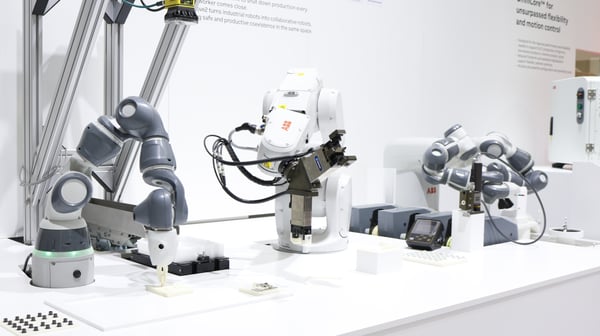 Read all about it in Tuesday’s post: The Big, Small and Creepy of Automatica 2018 Day 1

As we discovered on Thursday morning, it looks like 2018 is the year that robot programming became easy. Very easy. We’ve seen a bunch of solutions which are designed to allow you to program a robot with little to no programming experience. It seems likely that this trend is influenced (at least in part) by the increasing popularity of cobots.

Read all about it in Thursday’s post: Automatica 2018 Day 3: Death Defying Feats and Easy Programming 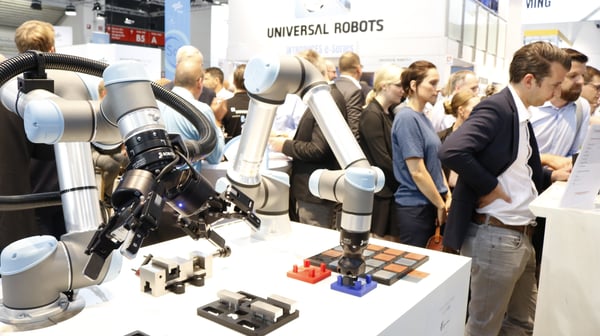 And, easy programming does not just mean controlling the robot’s movements. As we discussed earlier today, for a robot to be truly easy to program it must be easy to integrate and program the robot’s accessories and sensors. Even complex sensors like robot vision!

Read all about it in today’s earlier post: Color Detection and Chewing Gum on Day 4 of Automatica 2018

We were very excited to bring our own Insights here to Automatica, which allowed anyone to monitor the productivity of our demos using the online interface.

But, we are certainly not the only people here who think that real-time data analysis is vital for robot cells. As we discovered on Thursday with the amazing demo at the KUKA booth, data and real-time notifications are the future!

Read all about it in Thursday’s post: Cool Toys and Production Stats on Day 3 of Automatica 2018

5. The letter E is an important letter for the future of cobots

As Samuel (Bouchard our CEO) told us on Tuesday evening, there was a funny coincidence involving the letter E this year. Both UR and ourselves seem to have been drawn to the letter E as a mark of the future of collaborative robotics. 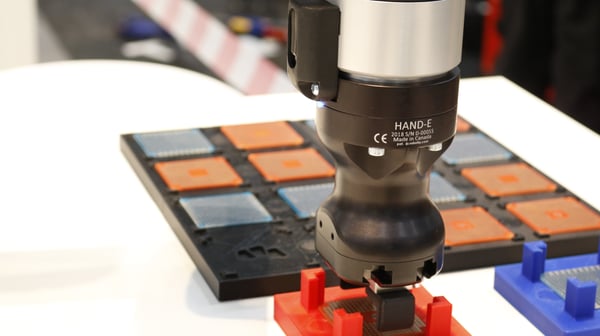 Read all about it in Tuesday’s post: Automatica 2018 Begins with The Future of Cobots

Just to prove it to you, here’s a final weird demo which we recorded this afternoon at the Walther Systemtechnik booth (Hall A6 Booth 322 … although the location of the booth doesn’t matter now as the booth is gone like all the rest of them).

It’s a demonstration of their solution to dispense oils, lubricants, silicones and pretty much whatever else you might want to dispense in a precise manner.

I don’t know how much gunk this demo has produced over the last week, but I’m glad I don’t have to clean it!

That’s our last live blog post for Automatica 2018. We hope you have enjoyed it as much as we have!

We’ve run the “Put_into_box” program on all of our robots, packed up our booth, and left the exhibition center.

Now, there’s only one more thing to do. Have a final German beer before we go home to Canada! 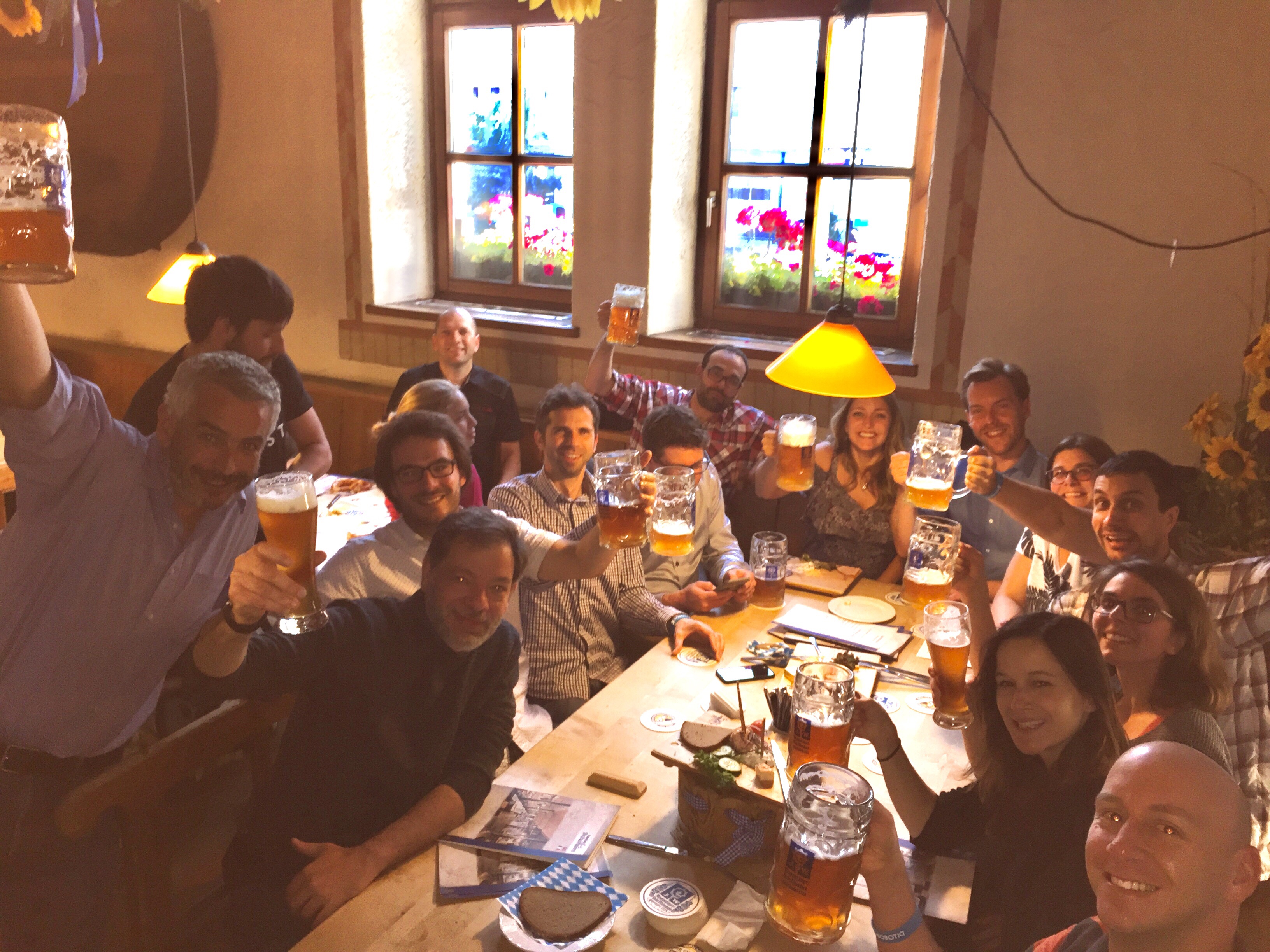