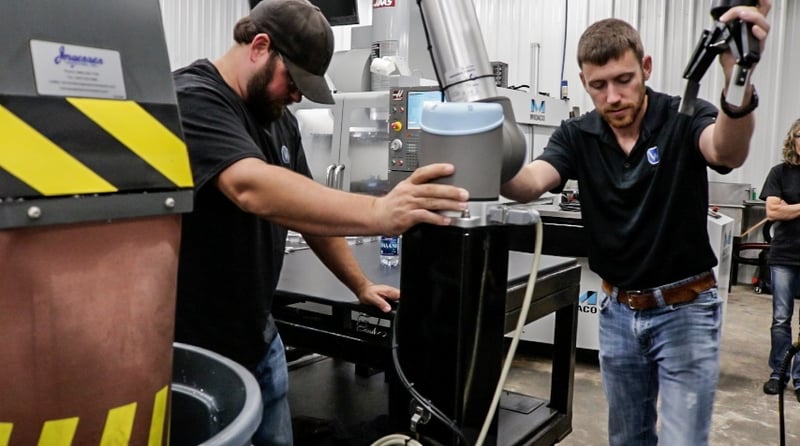 The team behind the design, implementation, and operation of robots in a robotic cell has a direct impact on how quickly the cell is up and running and on the long-term success of the robotic cell.

The book Lean Robotics – A Guide to Making Robots Work in Your Factory identifies the of lack employees with robotics skills as one of the most common reasons why manufacturers don’t use robots. This article is the second of a 2-part series about building an in-house robotics team. Part I covered identifying skills required. Part II is the next step – assigning roles and responsibilities.

The team behind the robot is extremely important to its long-term success.

To build your team, it can be useful to look at the different responsibilities and objectives for each role. The specific team members needed will depend on the size and scope of an implementation, and some roles can be combined. Robotiq provides a handy Team Roles and Responsibilities spreadsheet you can use to help identify your in-house experts and see which skills they have and which ones they need. The skills needed on the team are a mixture of robotics, knowledge of your manufacturing process, and project management.

Here’s a sampling of some of the roles, objectives and responsibilities from the spreadsheet:

Manufacturing Management must align the robotic cell implementation project with company objectives and ensure that the team has resources.

The Project Leader is responsible for defining which manual cell to automate, which metrics should be improved, and for determining the minimum viable robotic cell.

A Project Coordinator is essential to ensure the project is done on spec, on time, and on budget; to manage project resources; keep lines of communication open and flowing; and schedule project phases.

One or more Engineers are needed for many responsibilities including designing the robotic cell to meet requirements, testing, prototyping, documenting, and developing training for operations and maintenance.

The Installer‘s role is to assemble the robotic cell including mechanical and electrical components.

The Programmer is responsible for the communications interface between the robotic cell and other machines.

Operation and maintenance personnel keep the robotic cell productive, track problems and solutions, and provide feedback to the rest of the team.

Making someone responsible for Continuous Improvement ensures that a specific person will identify opportunities to improve the robotic cell and coordinate continuous improvement projects.

The Team Roles and Responsibilities spreadsheet includes several other roles, along with a more detailed list of responsibilities and KPIs for each. By assessing the skills your team currently has, along with the skills they’re interested in acquiring and the skills that are needed, you can build your own powerhouse robotics team. After the first successful implementation you can build on your team’s expertise for future lean robotics projects.