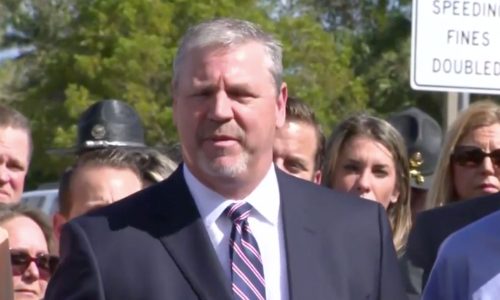 The FBI held a dayslong summit at its headquarters Wednesday to discuss best practices for preventing mass school shootings.

“We can’t allow ourselves to become numb to it,” Josh Skule, the FBI’s executive assistant director for intelligence, said in an interview after the summit. “We just cannot think that this is an acceptable way to live our lives, and so however this topic stays at the forefront so that folks continue to talk about is critical to mitigating the threat.”

Max Schachter, whose 14-year-old son Alex was one of 17 killed in the Marjory Stoneman Douglas High School shooting, spoke at the summit.

“After the shooting, just trying to deal with my grief, I was just incensed that Alex was killed because this monster shot right through the glass and he never went into the classrooms,” Schachter said. “I just didn’t understand why the schools were so unsafe and tried to figure out what I could to make them safe.”

Schachter has dedicated himself to lobbying for improvements to school safety.

The FBI also shared its findings of recent research into 63 active shooters. The study found 77 percent of shooters spent a week or longer planning their attack and that many of them had shown multiple signs of concerning behavior in the year leading up to their attack.

Additionally, FBI officials said the study showed 25 percent of the shooters had been previously diagnosed with a mental illness and the majority obtained their guns legally.

The FBI previously acknowledged that it failed to follow up on specific information about the Stoneman Douglas shooter that was called into a bureau tip line prior to the shooting.

The bureau is continuing to review its procedures for handling tips, especially since the volume of information being received by the FBI is “larger than we’ve ever had to deal with,” Skule said.

“The active shooter threat is here to stay,” said FBI Deputy Director David Bowdich. “I wish it wasn’t. I wish it was a passing phase.”