Robotics will create many millions more jobs than it displaces, according to a new report from the World Economic Forum. The Swiss think tank estimates that 75 million jobs will be displaced globally by 2022 while 133 million new jobs will be created. (H/T BBC)

The Robot People released video showing a UR3 cobot trained to automatically load, run and test product on Trotec’s SpeedMarker…

ABB launched its ABB Ability Voices of Innovation webcast with a fascinating conversation on automation between ABB’s Guido Jouret and Accenture’s Eric Schaeffer, who discussed how governments and companies can prepare themselves for participation in the manufacturing revolution.

The project’s first set of results was released this week and includes open-source ROS drivers for industrial hardware and generic ROS frameworks for both industrial apps and model-based tooling. (H/T Robohub)

In a thought-provoking piece for Asian Robotics Review, Tom Green (inspired in part by a chat with Universal Robots founder Esben Østergaard) wondered about the role AI could play in future industrial robot design and what new technologies might emerge once advanced AI turns its attention to robotics. (I recommend wearing 5D-printed Virtual Protective Smart Dust Quantum Liquid Metal Safety Gear, for this one.)

The third part of Slashdot’s Podcast Series came out this week. Panasonic’s Jim Dempsey and Slashdot’s Michael Krieger explored the topic of human-robot collaboration in the warehouse…

Robots are set to become smarter, more flexible and “increasingly tailor-made to meet new demand,” according to Per Vegard Nerseth, managing director of ABB’s Business Unit Robotics, quoted in Shine:

“Nowadays, companies of smaller scales also need robotics for their manufacturing, so our portfolio is expanding to cover smaller robots that occupy less space and are easier to manage,” Nerseth said, adding that ABB will customize robots for companies in different industries.

A South China Morning Post report explored “how Beijing’s ambitious industrial plan aims to break China’s reliance on foreign technology and pull its hi-tech industries up to Western levels.” (It’s the second report in a graphics-rich series that’s well worth checking out.)

A group of researchers has optimized the design of snake-like surgical robots. The multi-tool ‘i2 Snake’ (Intuitive Imaging Sensing Navigated and Kinematically Enhanced) bot uses a new ‘rolling-joint’ design, which is a bio-inspired mechanism that consists of two circular surfaces rolling against each other. This joint is found in many species, including humans, in parts such as the knee. (H/T ResearchGate)

The future global success of AI will depend heavily on international cooperation, China’s vice premier, Liu He, told attendees at the World Artificial Intelligence Conference in Shanghai. Via MIT Technology Review:

“We’re hoping that all countries, as members of the global village, will be inclusive and support each other so that we can respond to the double-edged-sword effect of new technologies,” He said through a translator. “AI represents a new era. Cross-national and cross-discipline cooperation is inevitable.”

Scientists have created a soft bot inspired by jellyfish to research fragile underwater environments. The bots, which are propelled by hydraulic-powered tentacles, are already able to swim through openings narrower than their soft bodies. 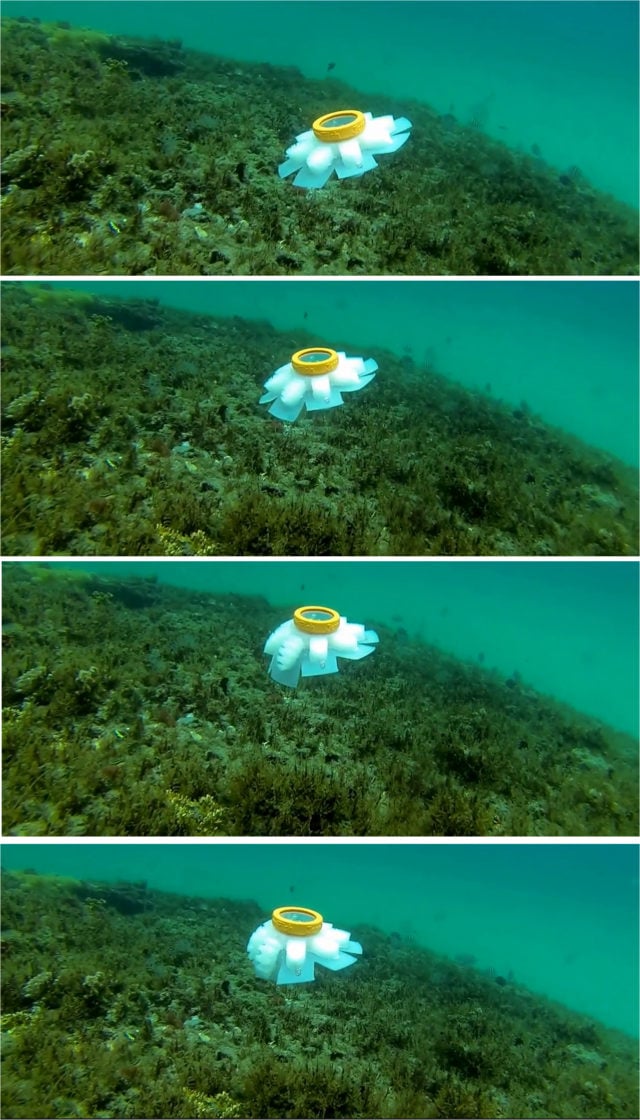 The robot’s design is based on the shape of the larval stage moon jellyfish (Aurelia aurita). Credit: Florida Atlantic University.

The team hopes that future versions of the robot will be “guardians of the oceans” able to explore coral reefs without causing any damage. (H/T BT)

Moxi, a nurse’s assistant bot from Diligent Robotics made its debut this week in a series of pilot programs at several Texas hospitals. The robot has a hand fitted with a Robotiq gripper that enables it to grasp objects. Moxi can also store medical supplies and transport them to medical staff. (H/T DigitalTrends) 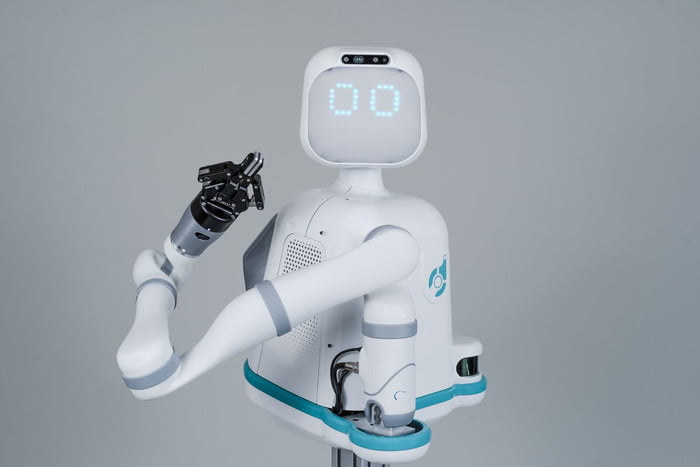 Moxi is designed to assist, rather than replace, nurses. Credit: Diligent Robotics.

I’ll be back next week with the latest cobot and robot news. Until then…

1. Guinness World Records has declared the 9’2″ x 16’6″, six-legged ‘Mantis’ to be the world’s largest rideable hexapod robot. Built by British engineer Matt Denton, Mantis can be operated by a driver in its cockpit or via remote control, weighs in at 4,188 pounds and has a top speed of .6 mph.

2. Scientists have developed a flexible robotic ‘skin’ that can be wrapped around inanimate objects, enabling them to move. The “flexible cuffs” –which could be used in space missions– consist of electronic air valves encased in fabric/elastic slips that squeeze points on an object’s surface, thereby allowing for specific, controlled movements. (H/T Science Robotics)

3. Engineers at BMW have created the firm’s first self-driving motorbike. The prototype vehicle won’t be appearing in stores though, as it was developed to assist in the creation of driver assistance tools. (H/T engadget)

4. Spectacular video released this week shows raw footage of a robot successfully capturing a satellite. The RemoveDebris experiment, led by the UK’s University of Surrey involved the launch of a one metre cube satellite from the ISS and the deployment of a net to capture it. Next, a drag sail will be used to drag the satellite into earth’s atmosphere where it will meet its fiery demise. (H/T QZ)

5. Jeanine Reutemann from the Centre for Innovation at the Leiden University in The Hague, The Netherlands, believes we need to move from fear-based sci-fi visions of the future to form “a more objective view of where future technologies will take us.”