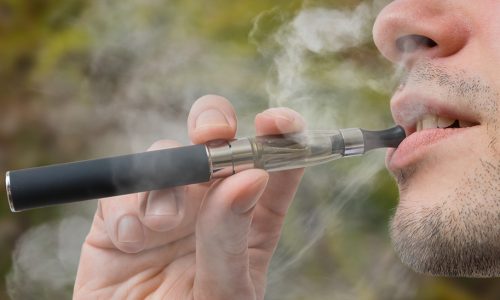 E-cigarettes have been the most commonly used tobacco product among middle and high school students since 2014, according to the 2017 National Youth Tobacco Survey from the Centers for Disease Control and Prevention (CDC).

E-cigarettes typically contain nicotine and can come in flavors such as mint, berry or chocolate, which the FDA believes is influencing teen-use, reports CNN.

On Wednesday, FDA Commissioner Scott Gottlieb warned that companies may be required to change sales and marketing practices, stop working with retailers who sell their products to minors, and remove flavored products from the market.

“We’re especially focused on the flavored e-cigarettes. And we’re seriously considering a policy change that would lead to the immediate removal of these flavored products from the market,” Gottlieb said.

The sleek design, portability and USB charger has been marketed to the public, many times using social media. Many e-cigarette manufacturers argue that their products help adults quit smoking cigarettes.

The FDA has cracked down on Juul, the $3 billion e-cigarette company, in the past. The company has become so engrossed in social media, the slang term “juuling” has become popular for people who use the product.

Juul released a statement saying “appropriate flavors” play a role in helping people ween off cigarettes, but added they are “committed to preventing underage use of our product.”

According to a study by the University of Pittsburgh, young adults who use e-cigarettes are more than four times as likely to start smoking tobacco cigarettes.

Last year, the FDA delayed regulations from the Obama administration that would have made companies submit their products for review in August 2018, reports ABC News. Instead, the deadline has been extended until 2020.

“The FDA should immediately move to regulate flavored e-cigarettes, instead of waiting until 2020,” Michael Bloomberg, billionaire philanthropist and anti-tobacco advocate, said.

Despite the extension, the FDA is determined to reduce the number of teenagers using e-cigarettes, Gotllieb confirmed.

The agency launched a vaping prevention campaign aimed at the 10 million youths who vape or considered vaping and sent 1,300 warning letters and fines to stores and websites that have illegally sold e-cigarettes to minors.

It is reported that Gottlieb called the letters the largest coordinated enforcement effort in the agency’s history.

“We’re also advancing our framework for the regulation of these products through our review process to address youth initiation; and we’re investing in compelling, science-based campaigns to educate youth about the dangers of e-cigarettes,” he said.