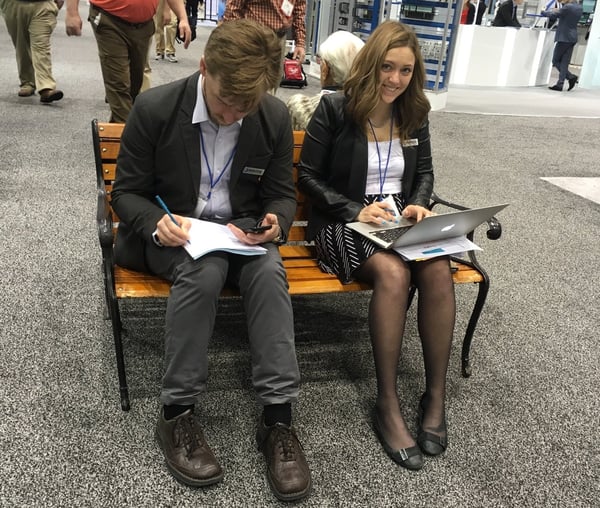 Drawing on both her inner artist and knack for logistics, Fanny Borgeat plans Robotiq’s events, giving distributors and clients something to take in, take home, and talk about.

Robotiq was founded after lab-mates Samuel Bouchard, Vincent Duchaîne, and Jean-Philippe Jobin decided to commercialize some of the mechatronic work they and their professor Clément Gosselin had created at Laval University in Quebec City. That was in 2008.

Today, Robotiq counts nearly 100 full-time staff, with our Grippers and sensors operating in 52 different countries. For more than two years, we’ve been telling the stories of our team members.

Fanny Borgeat’s creative skills are to thank for some of Robotiq’s most fun events, such as the house party she threw for the 2017 Robotiq User Conference, which even had robotic-themed drinks. Meanwhile, it’s due to her logistical know-how that our robots run as smoothly at international trade shows as they do at our Quebec City HQ.

An improvised desk at Automate 2017 in Chicago.

There are two seemingly contradictory personalities contained in Fanny. One is creative — she performs in musicals and takes dance classes — while the other is so logical and practical that even her backup plans have backup plans.

Planning events at Robotiq requires that kind of split personality: scheduling an informational forum for clients and distributors, while providing entertainment so that the technical information doesn’t overwhelm them; having a contingency plan in case things go awry, all the while making sure the company’s personality and message shine through.

Fanny takes her cues from the marketing department, which dictates our events’ objectives. She also listens closely to company engineers, who hold key product details they need her to understand. Yet Fanny is ultimately responsible for running an event, coordinating every element like the conductor of an orchestra.

At Robotiq, Fanny is surrounded by engineers, many of whom are mountain– and road– biking fanatics who take lunchtime runs. Both her love of musicals and general ambivalence to cycling and competition could make her an outcast — but she’s not. Who else would think up and organize a poutine bar for an event? As she turns away from the tried and tested, the rest of the company turns toward her. Those things happen when her mind does not head toward the sign that says Tried and Tested.

There are two seemingly contradictory personalities within the same Fanny Borgeat.

So just as a symphony needs both the violins and percussion, and a factory can use collaborations between robots and workers, the Robotiq logical types welcome her creative flair.

Fanny grew up just outside of Quebec City, to a Québecoise mother and a Swiss father. “When he came here, he fell in love with Québec, with our Canadian culture, with the climate,” says Fanny. In Lévis, where she grew up, her father taught guitar, as well as working as a session musician and organizing school concerts. Her mother, a nurse with a social flair that her older daughter inherited, remained a music enthusiast. Fanny recalls many years spent practicing the piano with her mother sitting next to her.

Music made Christmases and other family events memorable for Fanny. “My uncle also plays piano. I remember we would all sing around the piano and he and I would play duets.”

Fanny’s artistic interests also included dance and musical theatre, which she continues to pursue today. Over the years, she has taken up ballet, jazz, and flamenco and has performed in several plays, her most recent in 2017, when she appeared in the musical comedy Sister Act. 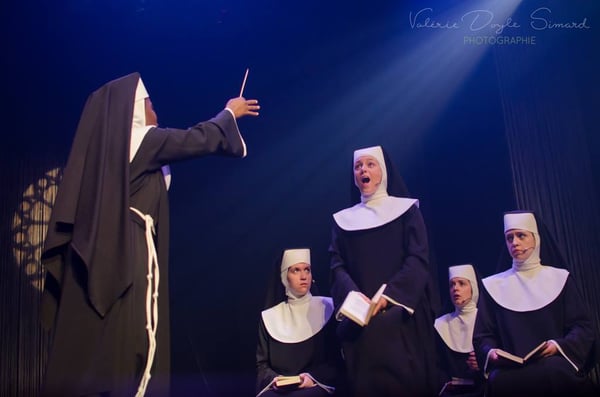 Fanny the singing nun in the musical comedy Sister Act.

As a teen, she was often embarrassed by her father’s big personality, and she would cringe when he did things like wear socks and sandals outside in the winter. “My friends’ fathers were more the business types, what I considered at the time normal,” she recalls. She now appreciates the creativity in her childhood home and her own offbeat sensibility. “I would not be this way if it wasn’t for him being the way he was when I was young.”

Her father was more typically Swiss when it came to teaching his children how to write properly. Her youth was filled with red-pencilled notes and strict lessons. A year after high school, she travelled west to improve her English. For six months in 2005, she lived in Banff, Alberta, and worked in the hospitality industry, sharing an apartment with other young women from her hotel.

With a new fluency in English and a renewed enthusiasm for school, she came back home and decided to finish the language studies she had begun in CEGEP, Quebec’s junior college system. In university, she enrolled in human resources counselling.

She landed a job at a fuel refinery as an administrative assistant in HR. She was not that stimulated at work, though she noticed that whenever there was a social activity, whether a company party or a conference on safety, she found herself volunteering to organize it. 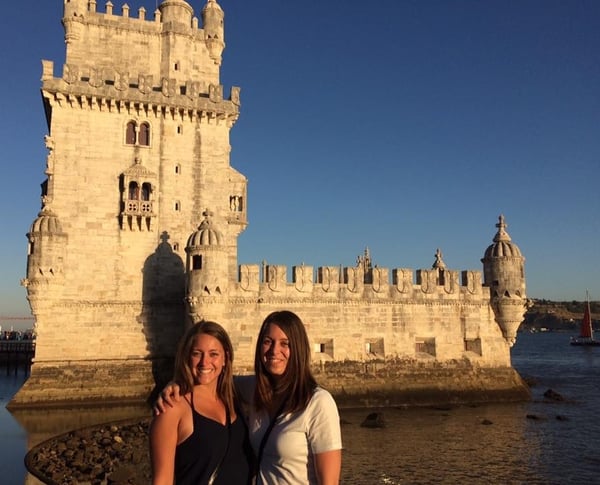 After a big event, Fanny takes time for vacations with friends.

One day, she spotted a posting for an Events and Communications Coordinator at Robotiq. The ad talked about marketing the company at international events. “I was like, ‘Okay, that’s something I’ve never done but it’s clearly my dream job.” She felt she lacked the right profile. But she applied anyway and was later called in for an interview.

Her research on Robotiq products and distributors did not go unnoticed by those conducting the interview. She told them she saw Robotiq as a young company with human values. She was keen to find a work environment that would connect with who she was, and that she didn’t just like doing things but liked doing them well. They quickly recognized a good match.

Then, she got the call from Robotiq.

“Our HR director says I had one of the best reactions to getting the job. I said ‘Yes, but are you sure?’” And, as if to emphasize further that he’d made a mistake, she reminded him that she had never organized large corporate events. “Then he told me, ‘Yes, I’m sure.’ When I hung up I said to myself, ‘Couldn’t you just say thank you?’”

The company was growing its outreach, and she would grow with it. To help her transition into the job, Karine Simard, now the Sales and Marketing Director, used her own experience to coach Fanny and set her up with event planners in Quebec City. Fanny also read as much as she could about the practice.

But it would be the events themselves — and what could go wrong — that would provide her with her best lessons.

At Automatica, the large robotics conference that took place in Germany this past June, the company that had to set up the large booth arrived three days late. Luckily, the Robotiq advanced team had come three days early, which helped mitigate damage. With Robotiq’s help, the booth was ready on time. 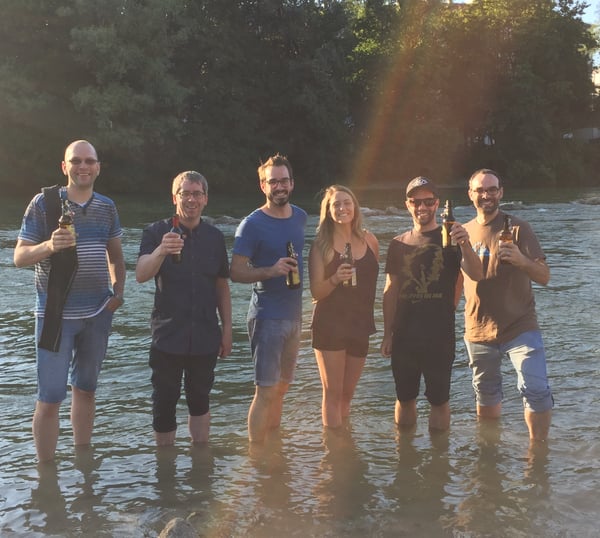 The Robotiq advanced team after a long day at Automatica 2018.

Robotiq flew 22 of its employees to Automatica. Many of them were at the booth, which had equipment for potential users to test out and a closed office for tête-à-têtes. She says international events like these help create bonds between the company and its distributors.

Away from event planning, she spends time with boyfriend Sébastien, who works as an electrician and shares her love of music. They see concerts together and recently inherited a piano.

Her father, Jean-Michel Borgeat, passed away last November at the age of 63 in his adopted city of Lévis. Sébastien recently made a request that recalls the way Fanny’s own parents mixed music with romance. “He asked if I could teach him to play piano.”

Sounds like she won’t need to make any back-up plan for that event.