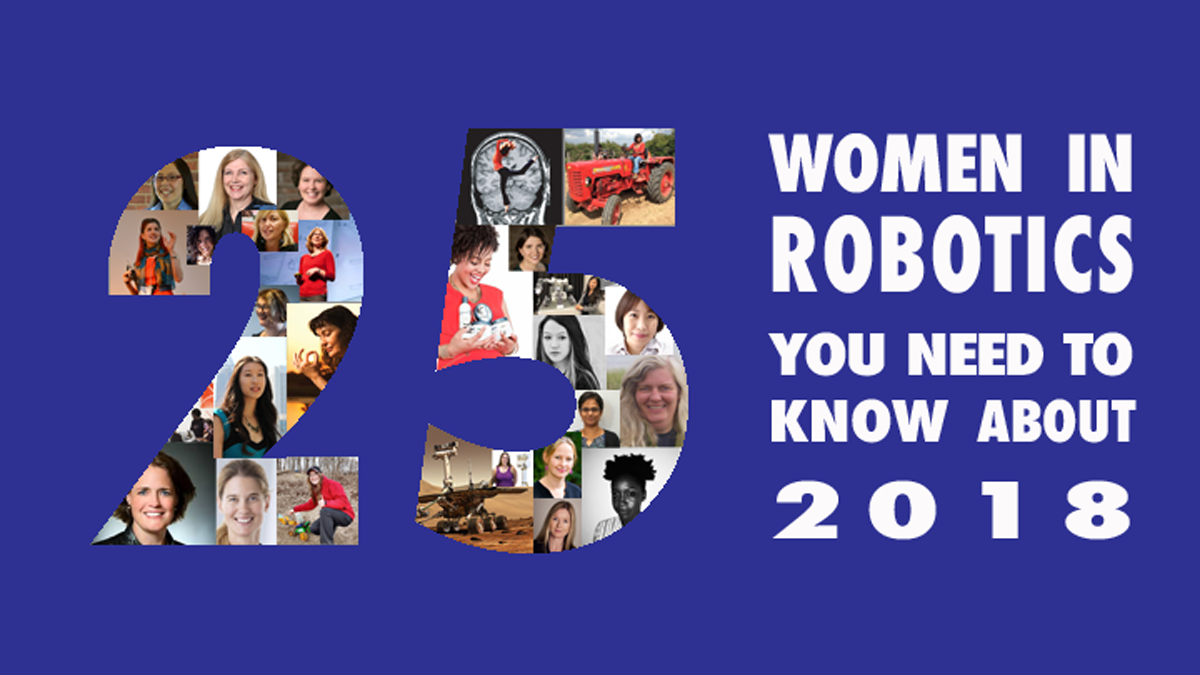 From driving rovers on Mars to improving farm automation for Indian women, once again we’re bringing you a list of 25 amazing women in robotics! These women cover all aspects of the robotics industry, both research, product and policy. They are founders and leaders, they are investigators and activists. They are early career stage and emeritus. There is a role model here for everyone! And there is no excuse – ever – not to have a woman speaking on a panel on robotics and AI.

But to start, here’s some news about previous nominees (and this is just a sample because we’ve showcased over 125 women so far and this is our 6th year).

In 2013, Melonee Wise was just launching her first startup! Since then she’s raised $48 million USD for Fetch Robotics and Fetch and Freight robots are rolling out in warehouses all over the world! Maja Mataric’s startup Embodied Inc has raised $34.4 million for home companion robots. Amy Villeneuve has moved from President and COO of Kiva Systems, VP at Amazon Robotics to the Board of Directors of 4 new robotics startups. And Manuela Veloso joined the Corporate & Investment Bank J.P. Morgan as head of Artificial Intelligence (AI) Research.

In 2014, Sampriti Bhattacharya was a PhD student at MIT, since then she has turned her research into a startup Hydroswarm and been named one of Forbes 30 most powerful young change agents. Noriko Kageki moved from Kawada Robotics Corp in Japan to join the very female friendly Omron Adept Technologies in Silicon Valley.

2015’s Cecilia Laschi and Barbara Mazzolai are driving the Preparatory action for a European Robotics Flagship, which has the potential to become a 1B EUR project. The goal is to make new robots and AIs that are ethically, socially, economically, energetically, and environmentally responsible and sustainable. And PhD candidate Kavita Krishnaswamy. who depends on robots to travel, has received Microsoft, Google, Ford and NSF fellowships to help her design robots for people with disabilities.

2015’s Hanna Kurniawati was a Keynote Speaker at IROS 2018 (Oct 1-5) in Madrid, Spain. As were nominees Raquel Urtasun, Jamie Paik, Barbara Mazzolai, Anca Dragan, Amy Loutfi (and many more women!) 2017’s Raia Hadsell was the Plenary Speaker at ICRA 2018 (May 21-25) in Brisbane, Australia. And while it’s great to see so many women showcased this year at robotics conferences – don’t forget 2015 when the entire ICRA organizing committee was comprised of women.

2016’s Vivian Chu finished her Social Robotics PhD and founded the robotics startup Diligent Robotics with her supervisor Dr Andrea Thomaz (featured in 2013). Their hospital robot Moxi was just featured on the BBC . And 2016’s Gudrun Litzenberger was just awarded the Engelberger Award by the RIA, joining 2013’s Daniela Rus. (The RIA is finally recognizing the role of women after we/Andra pointed out that they’d given out 120 awards and only 1 was to a woman – Bala Krishnamurthy in 2007 – and are now also offering grants for eldercare robots and women in robotics.)

We try to cover the whole globe, not just the whole career journey for women in robotics – so we welcome a nominee from Ashesi University in Ghana to this year’s list! So, without further ado, here are the 25 Women In Robotics you need to know about – 2018 edition!

Join more than 700 women in our global online community https://womeninrobotics.org and find or host your own Women in Robotics event locally! Women In Robotics is a grassroots not-for-profit organization supported by Robohub and Silicon Valley Robotics.

And don’t forget to browse previous year’s lists, add all these women to wikipedia (let’s have a Wikipedia Hackathon!), or nominate someone for inclusion next year!