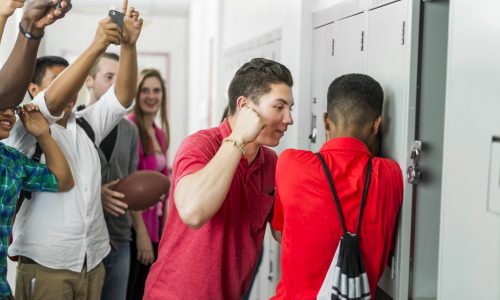 A letter from the school identified the boys involved, both suspects and victims, as members of the junior varsity football team.

Neither the victims’ or suspects’ names have been released to the public, which is common when dealing with minors.

Related: Study: Threats and Violence on the Rise in K-12 Schools

The state’s juvenile just system handled all charges, according to The Spokesman. All five students were taken into custody, charged and processed as of Friday evening.

Principal Casey Crouse says the JV football team forfeited their game on Thursday in light of the incident. Officials did not believe the varsity team was involved and allowed their game to be played.

District officials have not mentioned whether the coaches have been suspended, but did say they are cooperating with the police investigation.

“This is an ongoing investigation,” Damascus spokesman Derek Turner said. “However, we have counselors and psychologists for the students of Damascus High School for any support and counseling they may need.”

Maryland defines second-degree rape as any non-consensual act that can involve the body or use of an object over three basic categories:

Defense attorney Paul Zmuda says the punishment for teenagers charged with second-degree rape is usually geared toward rehabilitation. The accused person could be placed in a juvenile facility or put under house arrest.

“The juvenile system, in general, doesn’t like locking kids up who are under 16 unless they’d done something really serious,” Zmuda said.

Executive director and counsel for the Maryland Coalition Against Sexual Assault (MCASA) Lisa Jordan explained how hazing is meant to degrade or over-power someone, and sexual assault is a way to do that.

Jordan also says in many cases, assailants do not consider their acts to be sexual assaults when associated with hazing.

The allegations have made Sunil Dasgupta, chair of the health and safety committee in Montgomery, to question the safety education, coach training and rule enforcement at Damascus schools.

“If this is true and 14- and 15-year-olds are doing this, I can’t imagine that there is not a general environment that allows them this latitude,” Dasgupta said. “What is the culture in athletic departments, what is the safety education, what are the preventative measures?”

Hearings were held for three of the suspects Friday afternoon and the proceedings have not yet been revealed.