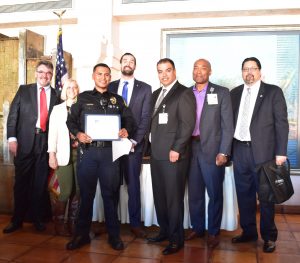 Healthcare security officers often are the unsung heroes at a hospital. Whether they are doing mundane tasks, such as monitoring video surveillance cameras, or extraordinary feats, such as saving the life of a suicidal patient or verbally de-escalating a potentially violent situation, hospital security officers deserve to be recognized for all of their hard work.

That’s why the Los Angeles/Orange County chapter of the International Association for Healthcare Security and Safety (IAHSS) hosts its annual Healthcare Security Officer of the Year awards luncheon every fall. Now in its fourth year, the program honors hospital security professionals for their distinguished performance over the past 12 months. This year’s event was held Oct. 18 at Tamayo Restaurant in Los Angeles.

Huntington Hospital Lead Officer Walter Escobar (third from left) was named runner up for his effective handling of car theft suspects who outnumbered him 2 to 1.

Huntington Hospital Lead Officer Walter Escobar was named runner up for his effective handling of car theft suspects who outnumbered him 2 to 1. During the incident, Escobar was physically assaulted by one of the suspects.

In addition to Zendejas and Escobar, 21 other healthcare security officers were honored at the event. They were:

Congratulations to all of this year’s winners!

Check out the slideshow!