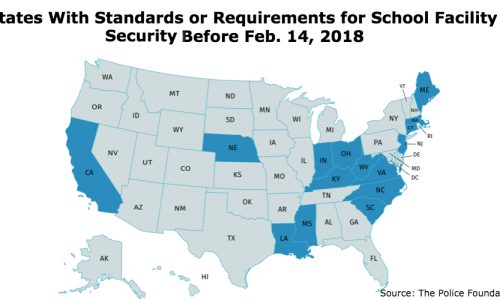 With last week’s elections, there were a lot of school security referendums on the ballot. Some passed, and some didn’t. Here are the summaries of some of the bills that were passed or were defeated at the polls.

Residents of Nobleville, Ind., passed a referendum that aimed to increase funding for school safety and mental health.

The district confirmed the referendum passed by a margin of 59 percent in a public statement.

“On behalf of all our employees, I want to enthusiastically thank the community for supporting the operating referendum for Nobleville Schools,” the statement said. “This referendum funding will allow us to retain and recruit high-quality staff, enhance mental health services to students and increase safety staff and equipment.”

The increased security equipment and personnel are in response to the shooting that took place in May. A 13-year-old student and teacher were hospitalized after a boy opened fire at his middle school.

“We take the role of managing this funding seriously and are committed to making responsible financial decisions that are aligned with our interests of providing students the best education experience possible in safe and supportive environments,” the statement said.

According to school officials, construction is set to being by June 2019, reports the Chicago Tribune.

The initiative passed with 73 percent in favor of the vote.

“Everyone in the community understands we’re living in a world right now where everyone is more concerned about school security,” Superintendent Michael Connolly said.

There are 6,500 students in the district who will reap the benefits of this school safety funding.

Related: Parents So Concerned about School Safety They Are Willing to Pay for It Themselves

The state’s constitution requires state borrowing to be approved by a majority vote.

State lawmakers had originally hoped for double of what was improved. Gov. Phil Murphy cut it from $1 billion because he was concerned about the state’s debt.

Voters in Livingston, La., did not support a sales tax fund to improve school security.

Fifty-six percent of the people voted against the half-cent sales tax, according to WBRZ.

The tax was pushed by the sheriff’s offices and school officials after the Parkland shooting.

Voters in Butler County, Ohio denied a school security levy that would have generated $4.6 million annually for five school districts.

The levy failed with about 53 percent of more than 50,000 voters voting against, reports Cincinnati.com.

Opponents of the levy felt too much of the money would have been used for mental health rather than security. Supporters felt mental health funding would result in safer schools.

“National and local safety and security experts all agree the single most important component in addressing school safety concerns is servicing the mental health needs of its students,” Superintendent Russ Fussnecker said.