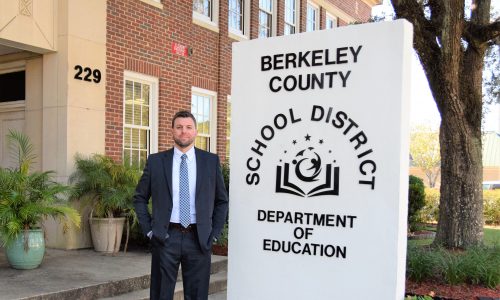 Managing school security and safety programs can be a juggling act. Just ask Tim Knight, who is Berkeley County School District’s (BCSD) safety and security director. It’s even more daunting when the position is brand new, which was the case when Knight started his career with the South Carolina district four years ago.

Despite these challenges, Knight has persevered, creating or improving training for his district’s SROs, teachers, staff and administrators; conducting drills; improving communications; involving students in school safety and security programs; and more.

“Since Mr. Knight’s arrival, he has built, and continues to advance BCSD’s safety and security program in one of the fastest-growing school districts in South Carolina,” says Senior Associate Superintendent for Operations and Administration Deon Jackson. “Under Knight’s leadership, BCSD is quickly becoming a proactive leader in K-12 school safety and security.”

That’s why Knight has been named co-winner of the Campus Safety magazine K-12 Director of the Year award.

Building Relationships Was Priority No. 1

Knight says that when he first came to the district, based in Moncks Corner, S.C., all the relationships were new because no one had been in his position before. From day one, he met with leaders of the six law enforcement agencies from which his 28 SROs are drawn, building a rapport and making sure everyone understood the safety and security direction that the district wanted.

“It’s in the best interest of the school district to have tight bonds with local law enforcement agencies and first responders,” he says. “We wanted to know what their exact roles would be, but on the flip side, they needed to know what our procedures and policies were on various types of incidents. It’s very important that we are all on the same page. It took a couple of years to get everyone on board with our vision, but once that happened, we started to click and became an incredible force together.”

One way that Knight encourages solidarity is through an annual, weeklong SRO summer program.

“It’s both hands-on and classroom training, but we also really focus on fellowship and camaraderie and getting to know each other,” he explains.

During the program, the SROs also receive training in mental health from representatives of the county health department and social services. The SROs have established working relationships with school guidance counselors, psychologists and social workers to jointly identify and assist troubled students in the hope of diffusing potential crises of all kinds.

Another vital element of the summer program is dealing with mass casualties.

“We have recently equipped all the officers with mass casualty kits and they are trained on how to use them,” Knight says. The kits, from North American Rescue, are specially designed for SROs and contain life-saving equipment to treat multiple victims until medical personnel arrives.

Berkeley County is geographically large, and its population is growing fast. Knight explains that about half the district’s schools are in municipalities or located within developed housing tracts. The other schools are in rural areas. Some administrators, teachers and parents in the rural areas expressed concern that with county first responders stretched thin, in a crisis their schools would be forgotten.

Partly to counter this concern, last fall Knight and the SROs staged one of the two annual large-scale active-shooter drills at a rural elementary school.

Of the full-scale drills, Knight explains, “We pick a school and create a scenario. Every time, it’s different. It could be a recreation of an actual incident that occurred somewhere in the country, or it could be something we’ve experienced before somewhere in the county. Between one and four SROs will play the bad guys. Through role playing, we make sure that the administrators, teachers and students follow the proper procedures to make themselves safe.”

These training sessions are conducted in partnership with law enforcement agencies and local emergency response personnel. After completion, they include a debriefing to help all agencies involved make necessary adjustments to provide the best collaborative response to potential emergencies in schools.

Although some members of the community believe that these types of drills might not be beneficial to psyches of younger children, Knight makes every effort to minimize their impact.

“We don’t want them to feel like they should be scared,” he says. “Our teachers do a great job keeping the atmosphere in the classroom positive. But the teachers and staff have to know exactly what to do because it’s going to be up to them to protect the students, who are going to listen to them and follow what they say and do.”

The post BCSD Director on a Relentless Quest for School Security and Safety appeared first on Campus Safety Magazine.