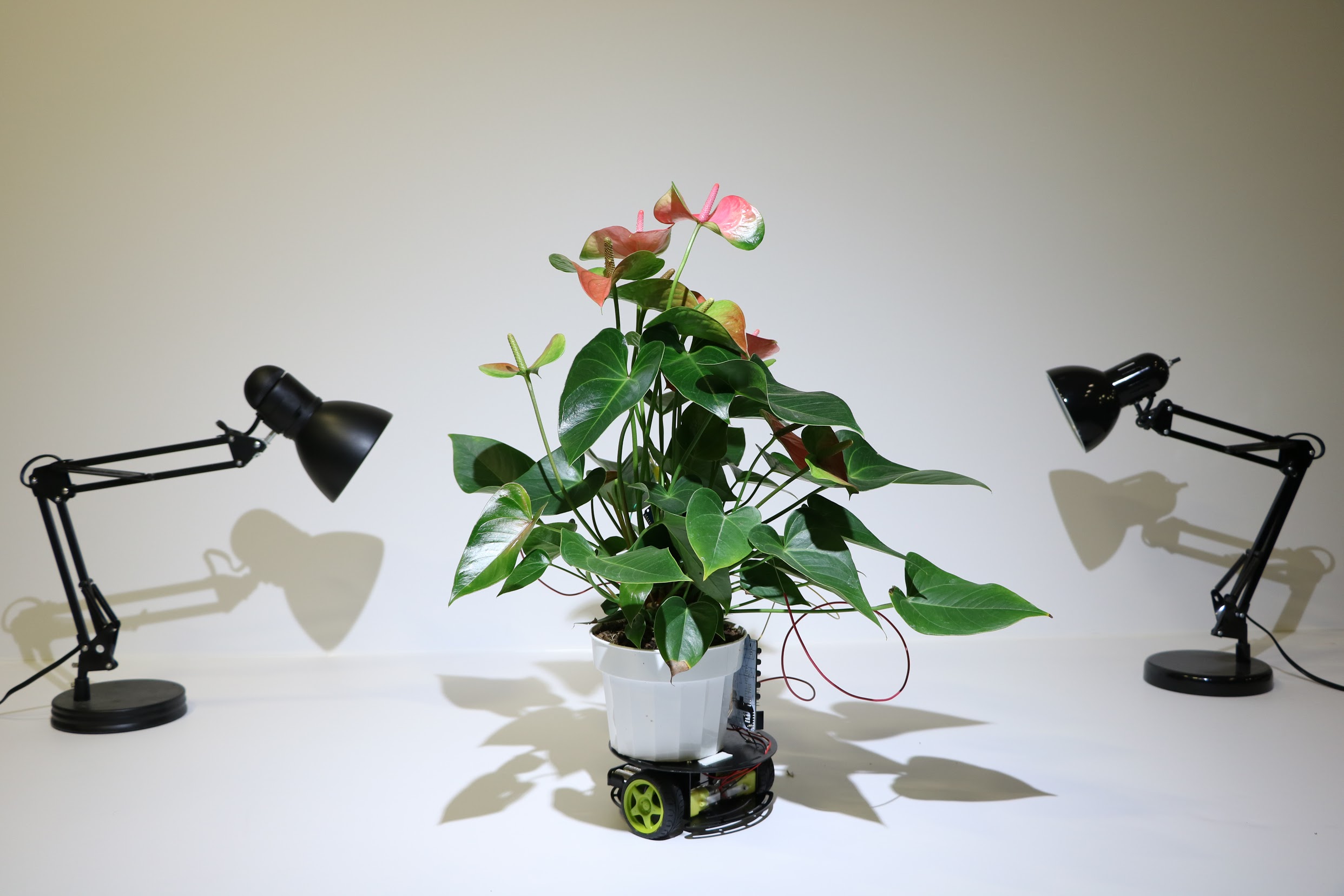 Elowan is a cybernetic lifeform, a plant in direct dialogue with a machine. Using its own internal electrical signals, the plant is interfaced with a robotic extension that drives it toward light.

Plants are electrically active systems. They get bio-electrochemically excited and conduct these signals between tissues and organs. Such electrical signals are produced in response to changes in light, gravity, mechanical stimulation, temperature, wounding, and other environmental conditions.

The enduring evolutionary processes change the traits of an organism based on its fitness in the environment. In recent history, humans domesticated certain plants, selecting the desired species based on specific traits. A few became house plants, while others were made fit for agricultural practice. From natural habitats to micro-climates, the environments for these plants have significantly altered. As humans, we rely on technological augmentations to tune our fitness to the environment. However, the acceleration of evolution through technology needs to move from a human-centric to a holistic, nature-centric view.

Elowan is an attempt to demonstrate what augmentation of nature could mean. Elowan’s robotic base is a new symbiotic association with a plant. The agency of movement rests with the plant based on its own bio-electrochemical signals, the language interfaced here with the artificial world.

These in turn trigger physiological variations such as elongation growth, respiration, and moisture absorption. In this experimental setup, electrodes are inserted into the regions of interest (stems and ground, leaf and ground). The weak signals are then amplified and sent to the robot to trigger movements to respective directions.

Such symbiotic interplay with the artificial could be extended further with exogenous extensions that provide nutrition, growth frameworks, and new defense mechanisms.

About Cyborg Botany
Cyborg Botany is a new, convergent view of interaction design in nature. Our primary means of sensing and display interactions in the environment are through our artificial electronics. However, there are a plethora of such capabilities that already exist in nature. Plants, for example, are active signal networks that are self-powered, self-fabricating, and self-regenerating systems at scale. They have the best kind of capabilities that an electronic device could carry. Instead of building completely discrete systems, the new paradigm points toward using the capabilities that exist in plants (and nature at large) and creating hybrids with our digital world.

Elowan, the robot plant hybrid, is one in a series of such of plant-electronic hybrid experiments.