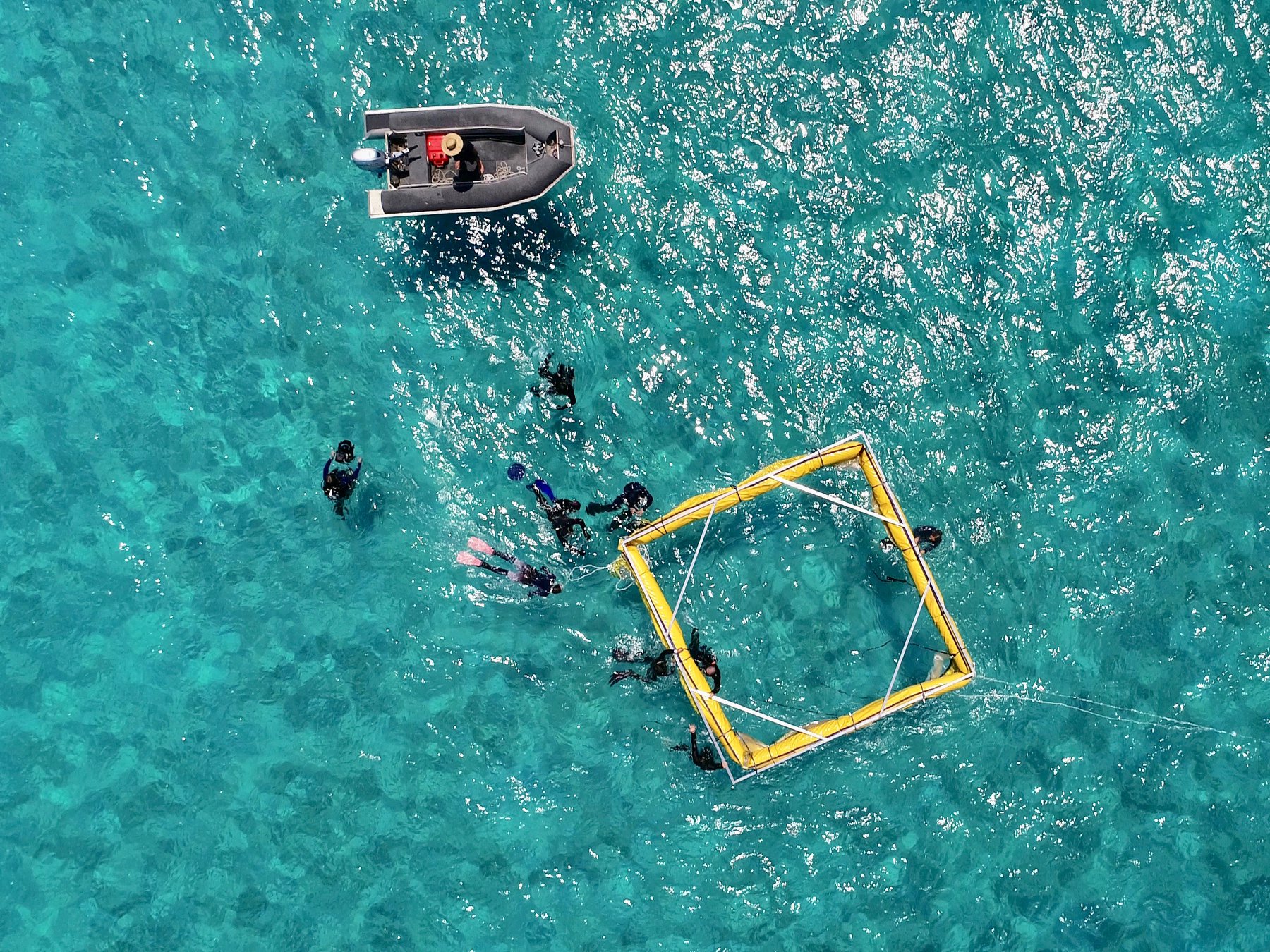 In a world first, an undersea robot has dispersed microscopic baby corals (coral larvae) to help scientists working to repopulate parts of the Great Barrier Reef during this year’s mass coral spawning event.

“This year represents a big step up for our larval restoration research and the first time we’ve been able to capture coral spawn on a bigger scale using large floating spawn catchers then rearing them into tiny coral larvae in our specially constructed larval pools and settling them on damaged reef areas,” Professor Harrison said.

“Winning the GBRF’s Reef Innovation Challenge meant that we could increase the scale of the work planned for this year using mega-sized spawn catchers and fast track an initial trial of LarvalBot as a novel method of dispersing the coral larvae out on to the Reef.

“With further research and refinement, this technique has enormous potential to operate across large areas of reef and multiple sites in a way that hasn’t previously been possible.

“We’ll be closely monitoring the progress of settled baby corals over coming months and working to refine both the technology and the technique to scale up further in 2019.”

With a current capacity to carry around 100,000 coral larvae per mission and plans to scale up to millions of larvae, the robot gently releases the larvae onto damaged reef areas allowing it to settle and over time develop into coral polyps or baby corals.

“During this year’s trial, the robot was tethered so it could be monitored precisely but future missions will see it operate alone and on a much larger scale,” Professor Dunbabin said.

“Using an iPad to program the mission, a signal is sent to deliver the larvae and it is gently pushed out by LarvalBot. It’s like spreading fertiliser on your lawn.

“The robot is very smart, and as it glides along we target where the larvae need to be distributed so new colonies can form and new coral communities can develop.

“We have plans to do this again in Australia and elsewhere and I’m looking forward to working with Professor Harrison and Southern Cross University, the Great Barrier Reef Foundation and other collaborators to help tackle an important problem.”

This project builds on the work by Professor Dunbabin who developed RangerBot to help control the coral-killing crown-of-thorns starfish which is responsible for 40 per cent of the reef’s decline in coral cover.

Great Barrier Reef Foundation Managing Director Anna Marsden said, “It’s exciting to see this project progress from concept to implementation in a matter of weeks, not years. The recent IPCC report highlights that we have a very short window in which to act for the long term future of the Reef, underscoring the importance of seeking every opportunity to give our reefs a fighting chance.

“This project is testament to the power of collaboration between science, business and philanthropy. With the support of the Tiffany & Co. Foundation, whose longstanding support for coral reef conservation globally spans almost two decades, our international call for innovations to help the Reef has uncovered a solution that holds enormous promise for restoring coral reefs at scales never before possible.”

Following the success of this initial trial in 2018, the researchers plan to fully implement their challenge-winning proposal in 2019, building even larger mega spawn-catchers and solar powered floating larval incubation pools designed to rear hundreds of millions of genetically diverse, heat-tolerant coral larvae to be settled on damaged reefs through a combination of larval clouds and LarvalBots.