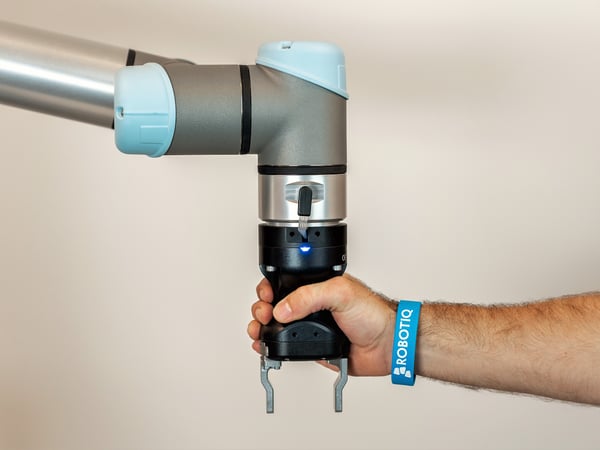 Do collaborative robots always have to move slowly? No! Here are 5 safety critical applications which can boost your cobot productivity. Collaborative robots are safe, right? Well, yes. They are designed to be safe around humans. However, as our experts at the recent Robotiq User Conference discussed, they are not safe in all situations.

We don’t often think of hand-guiding as a safety-critical application, but it is.

Safety is important for all robot applications. You should always carry out a risk assessment, whether you are using a tiny tabletop cobot or a huge industrial manipulator. However, safety is especially critical for some applications.

You need to pay extra attention to safety whenever your application involves a human physically interacting with the robot. But, what applications are we talking about here?

Thankfully, the robotic standards give us some clues. There are 5 types of application which are safety critical with collaborative robots.

First, I should explain why these 5 applications are so useful.

It’s quite normal to see collaborative robots running in a reduced speed mode. If you have seen a cobot demo (at a trade fair, for example), you have probably seen this mode in action. Because this is so common in demos, some people mistakenly believe that cobots can only move slowly. However, the true maximum speed of cobots is often similar to industrial robots.

Reduced speed mode is designed to keep the cobot within the safety limits as specified by the cobot standards (e.g. ISO/TS 15066). When the robot collides with a person in this mode, it won’t apply a harmful force to them.

The problem with reduced speed mode is that (obviously) it makes the robot move very slowly. This means that you sacrifice productivity for safety.

If you want to run the robot at full speed, you need to add other safety features. This is where the 5 applications come in.

The industrial robot safety standard ANSI/RIA R15.06-2012 proposes that collaborative applications can be grouped into the following 5 categories based on the nature of the physical interaction. Each application allows for the robot to be run at full speed most of the time whilst also maintaining safe operation when a human is present.

The 5 Cobot Applications Where Safety is Critical

For all of these applications, the robot can move at full speed for the non-collaborative parts of the task (when no person is near). The robot then stops or goes into reduced speed mode when a person comes near.

All applications rely on having a “safeguarded space” around the robot, either using a fixed safety fence or safety sensors. You can find out more about safeguarded spaces in our article Cobot Safety: Are You Too Close to Your Robot?

Many of the applications rely on using safety planes in programming. This feature is demonstrated in this video and has been updated in the new UR e-Series cobots.

The robot operates at full speed behind a safety plane. Most of the plane shouldn’t be passed by the robot — so can be a physical safety fence — but a small window is open. Whenever the robot nears this hand-over window, it goes into reduced speed mode. The human worker then reaches through the window and passes objects to and from the robot.

Safety is ensured in hand-over applications by using:

A benefit of this method is that it gives clarity to where interaction should happen. Workers know that they should only physically interact with the robot when it is near the window.

This is a similar idea to hand-over applications. However, instead of a using a small window, the safeguarded space is defined by a whole safety plane. This “interface window” acts like a virtual wall. Whenever the robot reaches this safety plane, it stops. The human worker can then pass objects to and from the robot. The application can be augmented by allowing the human to drag the robot outside of the plane using hand-guiding.

Safety is ensured in interface applications by using:

A related safety method is to put the robot in reduced speed mode when it passes a safety plane. However, this would not be an interaction mode. As with hand-over applications, the benefit of the interface window is that it defines where the physical interaction must take place.

Safety is ensured in collaborative applications by using:

This is where the human worker enters the safeguarded workspace and carries out some other task while the robot runs in reduced mode. There is minimal physical interaction between the robot and human. The ANSI standard calls these “inspection” applications because it’s used when the operator inspects an operational robot. However, it’s not limited to inspection tasks.

Safety is ensured in concurrent applications by using:

Concurrent applications are very similar to the normal, safe operation of a collaborative robot. Both the robot and human operator gets on with their own job but they are working in close proximity.

We don’t often think of hand-guiding as a safety-critical application, but it is. The robot programmer physically moves the robot to the desired locations and stores them to the program. Systems like ActiveDrive make this easy and safe. You don’t need to worry about the safety of this application when you are using most collaborative robots because the manufacturer has ensured safety for you.