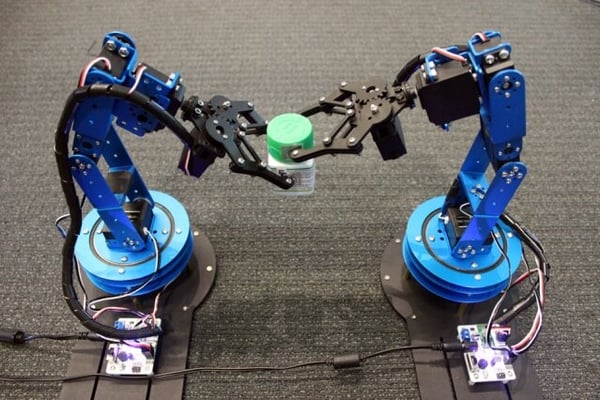 MIT Media Lab researchers have unveiled a system that uses RFID tags to help robots locate moving objects quickly (within 7.5 milliseconds, on average) and accurately (with a margin of error of less than 1 centimeter).

The researchers hope the technology will enable “greater collaboration and precision by robots working on packaging and assembly,” TechXplore reported:

In the system, called TurboTrack, an RFID tag can be applied to any object. A reader sends a wireless signal that reflects off the RFID tag and other nearby objects, and rebounds to the reader. An algorithm sifts through all the reflected signals to find the RFID tag’s response. Final computations then leverage the RFID tag’s movement—even though this usually decreases precision—to improve its localization accuracy.

Researchers from the IRAS group at STIIMA in Italy have unveiled a ROS-based generalized damped controller for cobots that use Series Elastic Actuators. New video showcases how effective the new system is when compared to standard controllers…

Brexit has given Universal Robots “a bit of a boost,” area sales manager Mark Gray told the UK’s Talk Radio this week:

“We’ve seen an increase in sales since the Brexit vote. It’s working in our favour because we can offer a solution to a labour gap in the market […] The human/robot collaboration actually makes for a more productive manufacturing process – they can work as a partnership.”

There’s no other way to put it: The Robot Report has gone cobot crazy this week, with the release of a special issue dedicated to cobot technologies. Among the digital magazine’s info-packed articles, ‘Is fully automated bin picking finally here?‘ from Eric Truebenbach, director of corporate development at Teradyne and acting head of business development for cobot applications at Energid really stands out.

We were spoiled for choice with informative cobot primers this week. Over at Automation.Com, Editor Bill Lydon went on an inside look at Universal Robots’ “efforts to empower the Small/Medium Enterprise.”

Cobot maker Rozum Robotics announced the launch of 100 cobot cafes in Ukraine in collaboration with a local chain. The official launch is scheduled to take place in Kiev on March 17…

Changing consumer attitudes mean that manufacturing has to adjust to a lower-volume, high-customization paradigm –a move away from the high-volume, low-customization demands of the 1980s, ABB global head of robot systems Mike Larsson told Barron’s this week.

Did you know that just under half of manufacturing hours worked today are spent on manual jobs? Or that by the year 2030 it’s estimated that only 35 percent of worker time will be spent on such routine work? These are just some of the tidbits from Raconteur’s latest infographic. (Click here for the full size version.) 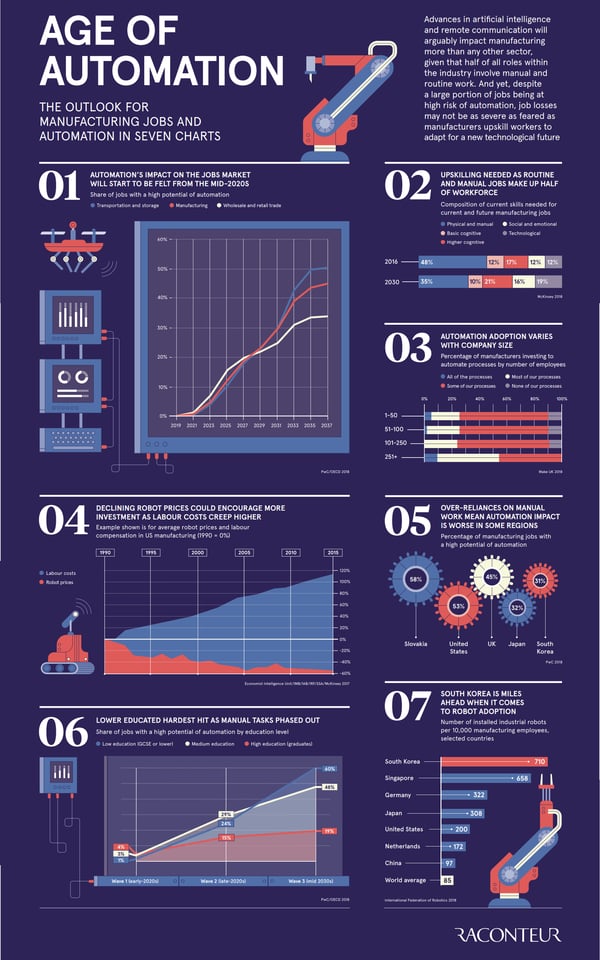 At 37 minutes long, you might want to save this video for when you’re finished with the rest of this post, but if you have an interest in safety and human-robot collaboration (HRC) in manufacturing, it’s certainly worth watching in full. In it, Abdullah Alhusin Alkhdur, a researcher at Sweden’s KTH Royal Institute of Technology, and a participant in the European COROMA cobot project takes us through key safety issues in HRC and highlights some of the technological solutions available…

Meanwhile, in other cobot news…

An enterprising Chinese schoolgirl was busted using a robot to cheat on her handwriting assignments, it was reported this week… But she managed to impress most of the Internet in the process. This bot can write out your homework for you. But you may get in trouble if your Mom catches you with one. Credit: Thepaper.cn

Zhang was amazed when her daughter finished all her text-copying in two days, with neat writing, the report said. But while cleaning the girl’s room, Zhang found the device – a metal frame and pen, with packaging claiming it could “imitate all sorts of handwriting”.

Zhang should not despair: This girl thinks like a robotics integrator. As a technologically-literate, process-oriented 15 year-old, she realised that she could improve personal productivity and free herself to work on more interesting tasks, if she successfully applied some off-the-shelf automation to the traditionally manual (and time-consuming) task of handwriting. Admittedly, her approach completely misses the point of the exercises –handwriting training and memorisation– but with just a little tweaking, that engineering spirit could one day be put to even more productive uses.

At time of writing, Israel’s privately-funded mission to send the US$100m, 1.5m-high, 585kg ‘Beresheet’ robot to land and hop along the lunar surface is just hours from launch at Cape Canaveral, Florida. Assuming all goes well, the space bot is expected to land on the moon in around two months and to operate for about two days in total. 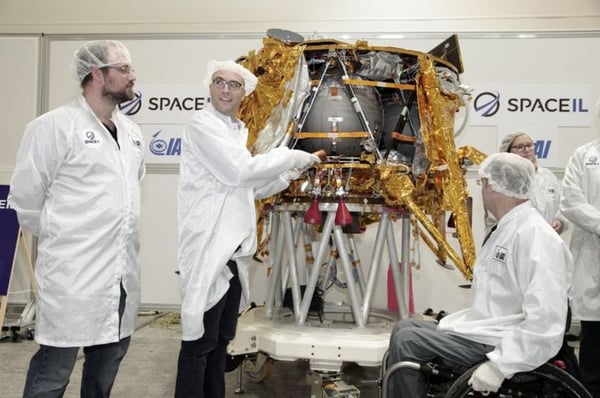 [Beresheet] will take photos to send back to Earth and engage in some magnetic investigations. The robot’s onboard magnetometer device will acquire measurements – and not just in one location, because Beresheet will, some hours after landing, hop to a new spot.

Samsung has been showcasing its home cooking cobot ‘Bot Chef’ this week and it’s easy to see why, because this bot is a visual treat. 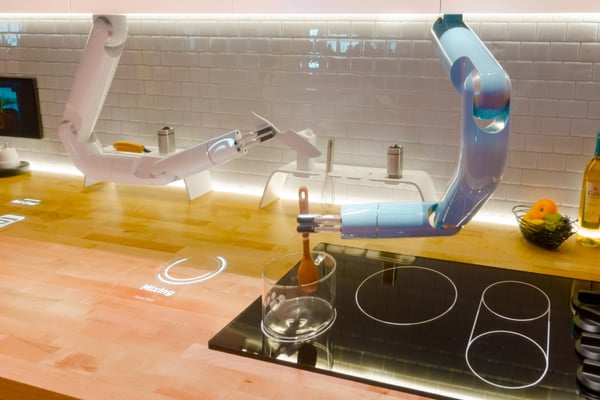 Bot Chef is capable of a wide range of kitchen tasks – from chopping and whisking, to pouring and cleaning. Based on SARAM, Samsung’s multi-purpose programmable robotic platform, the lightweight robotic manipulator arm has six degrees of freedom, with the diameter, reach and safety of a human arm. This allows it to perform with a payload just enough to lift common, everyday kitchen items […] With advanced internal and external sensors and AI-based planning algorithms, the Bot Chef works alongside a person safely, even when they get in each other’s way.

Swing by next week for more of the latest robotics news! Until then, hope you enjoy…

2. A robotics enthusiast has converted a 36-year old Apple IIe computer into a mobile “killer” robot. (VICE has more.)

3. Jeff Schneider, a professor in the Robotics Institute at Carnegie Mellon University gave a talk recently about some of the challenges facing self-driving car development.

4. Researchers at CSIRO are working on a system that can autonomously screen and evaluate materials, 24/7.

5. Will artificial intelligence bring the human race to an “inhuman future”? An Oxford Union panel discusses..