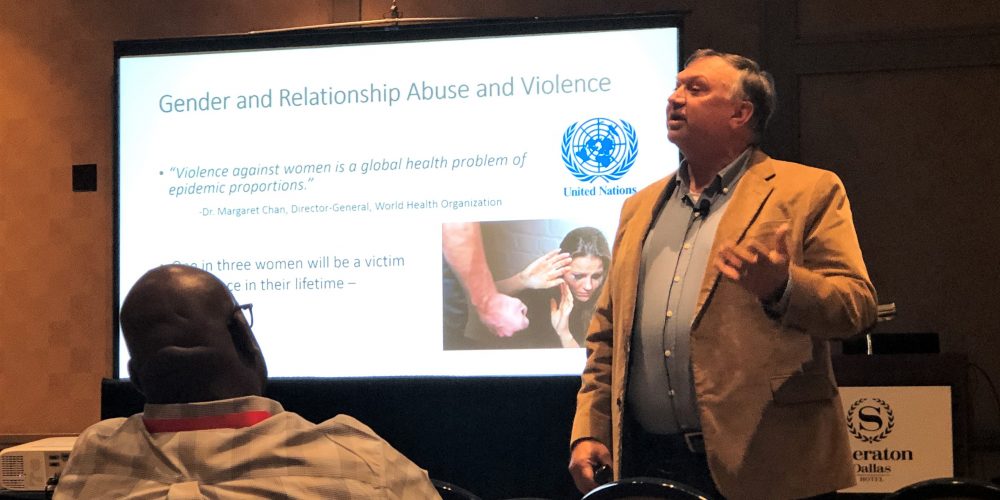 He presented at the Campus Safety Summit, which was part of the 14th annual Conference on Crimes Against Women last month. At the event, Campus Safety spoke with the professor on how men and boys can be part of the solution for gender-based violence.

Brungardt has worked over the last 10 years to study the issue of gender-based violence, focusing on violence prevention, specifically with men and boys.

“My part has been to look at the role that men play, that boys play, in this issue, and primarily what role young men, manhood and masculinity play in violence,” Brungardt told Campus Safety.

While men can certainly be victims of gender-based violence, the percentages are overwhelmingly higher for women and girls being the victims, and men and boys being the perpetrators.

Girls and young women between the ages of 16 and 24 experience the highest rates of intimate partner violence — almost triple the national average, according to these statistics from LoveIsRespect.org. Nearly 1 in 3 (29%) college women say they have been in an abusive dating relationship.

Brungardt and his wife Dr. Christie Brrungardt understand the serious nature of intimate partner violence because their daughter, Jana Mackey, lost her life in 2008 to violence perpetrated by an ex-boyfriend. In response, they formed Jana’s Campaign and now deliver educational programs to nearly 40 states that work to prevent domestic and dating violence as well as sexual assault and stalking.

Brungardt has made it his mission to address men’s roles in gender-based violence.

“From my perspective, this is a man’s issue…We need to focus on men doing this work,” he said.

Related: Conference on Crimes Against Women Brings Experts, Advocates Together

Talking to ‘Guys About Guys Stuff’

Brungardt works to break into the male culture — or “boys will be boys” mentality — to show men a new perspective on treating women, whether it’s in private or in public, like on a college campus.

During his 2010 TedTalk, Tony Porter, a social justice activist, called out men to stop acting within the guidelines of what society has set for what it means to be a man. Brungardt aims to break down those barriers as well.

Even the so-called “good men,” Brungardt says — men who are not violent towards women — support the environment that allows the “bad men” — the sexual predators or violent men — to do what they do.

After speaking about gender-based violence on college campuses, Brungardt said he often has students come up to him and ask the question, “What do good men need to do?” He urges them to:

Jana’s Campaign created the Campus Men’s Action Network (CMAN), which is a model that encourages men to develop a campus coalition and actively engage in the work to end gender-based violence.

Start the Conversation with Boys at a Young Age

Brungardt also speaks with students on K-12 campuses because “the sooner we talk to young boys, the better off we’re going to be.”

He believes that boys at a young age need to understand the meaning of consent and what it means to respect themselves, as well as other boys and girls.

“Like any discipline, the earlier you learn, the more you will learn and change behaviors,” he said.

When working with schools, Brungardt describes most as receptive to the work and message he is putting out, saying school administrators “are fascinated by this topic.” He says he is often the first speaker schools have had to talk about gender-based violence, especially to an all-male audience.

He added that most of the time, the conversation is not lost on younger students because they are already enveloped in the male culture at a young age.

A big part of the problem, Brungardt says, is young boys are not getting the help they need when dealing with their own struggles. They often feel like they can’t express their emotions and many times, that pent up anger leads to violence.

The Representation Project uses film and media to inspire people to challenge gender stereotypes and shift norms. Their film, “The Mask You Live In,” follows boys and young men as they struggle to be true to themselves while dealing with America’s narrow definition of masculinity.

To learn more about “The Mask You Live In,” click here.

Why Men are Violent Towards Women

Brundgardt attributes men’s violence towards women to two main factors that need to be acknowledged to stop the violence.

Gender inequality plays a huge role in violence against women. What it comes down to is men seeing women as property, less than themselves or someone to be owned, says Brungardt. This mindset can be seen in many places, whether it is in films, songs or commercials, and it has been going on for centuries.

Related: The Sexual Assault Statistics Everyone Should Know

In 2016 at Fort Hays State University, a group of boys displayed a banner that read, “Freshman Daughter Drop-off” outside their off-campus residence.

The photo went viral when Jana’s Campaign shared it with the following message:

“We at Jana’s Campaign have worked a great deal with Fort Hays State University officials to reduce gender and relationship violence on our campus. FHSU is in Hays KS, the city where our national headquarters is located. Obviously, we have much work left to do.”

Brungardt personally met with the boys who made the banner. They told him it was only a joke and they’re good guys.

Brungardt then posed the question, “Even if you are good guys just having fun, what message are you sending to the violent guys who may not take it as a joke?”

Personal History of One’s Own Trauma

As seen in the video above, many young boys are not dealing with their mental health issues, believing it makes them weak or “less than a man.”

As those boys grow into men, they carry those childhood memories and experiences that they have not dealt with. Some are victims of violence themselves or witnessed violence and never got the help they needed.

According to the National Child Traumatic Stress Network, a traumatic event is a frightening, dangerous or violent event that poses a threat to a child’s life or bodily integrity.

Without treatment, traumatic events can affect the brain and nervous system and increase health-risk behaviors such as smoking, substance abuse and high-risk activities. Adult survivors may have difficulty establishing fulfilling relationships and maintaining employment.

Brungardt believes it’s up to men to break the cycle of violence and be an advocate for change. It is especially important for men to pass on good values to the boys in their lives.

As simple as it may sound, Brungardt says to “Be a good Dad,” when he speaks to men. If encouraged to break society’s standards of gender roles and be the best person they can be, young men have the tools to end gender-based violence.

Here are some ways to conduct a direct action campaign and help break the cycle:

To learn more about Jana’s Campaign and the work of Drs. Curt and Christie Brungardt, visit their website here.

The post Why Men Need to Talk About Gender-Based Violence appeared first on Campus Safety Magazine.