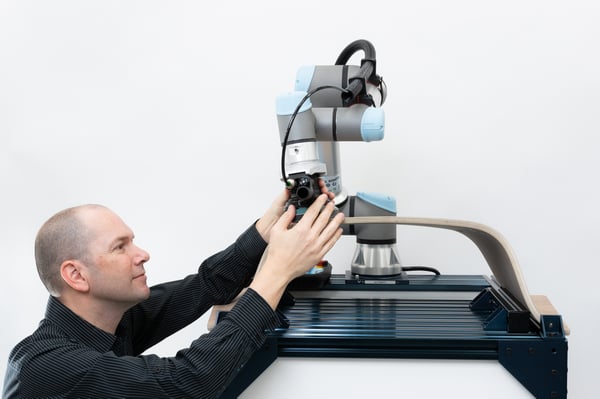 Collaborative robots are great for a huge range of tasks… including finishing (e.g. sanding, polishing). But, some people believe that cobots can’t do finishing tasks. Here’s why they are mistaken.

There are a lot of misconceptions about collaborative robots. For example, some people believe that cobots are always inherently safe or that they eliminate the need for human workers. These aren’t true but they are common misunderstandings.

Before the Automate trade fair this year, Universal Robots was featured in an article in Robotics Tomorrow.

In it, they they wanted to dispel two common myths about cobots:

The first of these is obviously false. Of course cobots can handle industrial applications, that’s what a huge number of our customers use them for!

But, what about that second myth?

Obviously, we at Robotiq know that cobots are suitable for sanding tasks — we recently released our Sanding Kit, after all.

Why do people believe that cobots are not capable of doing tasks like sanding or polishing?

A large part of this misconception could be related to force…

What people believe about cobots

Collaborative robots are immensely popular for tasks like machine tending, pick and place, and packing. These tasks are immediately valuable to businesses and are easy to program (e.g. using hand-guiding to physically move the robot around).

But, there’s a downside to the high popularity of such tasks. People wrongly believe that cobots are only suited to these tasks.

Nothing could be further from the truth!

I’ll repeat that, because it’s important:

Cobots are industrial robots with added features, not fewer features.

This means that cobots can be just as capable in terms of performance (e.g. force and repeatability) than similarly sized industrial robots.

The force a robot can apply to the workpiece is a fundamental property for finishing tasks like sanding and polishing.

Why force is important for finishing

If you’ve ever sanded a piece of wood (or any other material) by hand, you’ll know that force is vital for finishing tasks. Both sanding and polishing require you to apply a consistent force to the workpiece as you move the abrasive media across its surface.

Robotic sanding and polishing both rely on force control. This ensures that the robot applies a consistent contact force on the workpiece.

On top of this, the robot itself needs to have enough stiffness to maintain this force. This means that its motors must be able to provide enough torque that the sanding end effector keeps a firm contact with the material throughout the entire motion.

However, it’s important to remember that the key to sanding and polishing is consistent force. It is not necessary to provide a very high downward force for sanding. In fact, too high a force can lead to a bad surface finish. The robot just needs to be able to maintain a high enough stiffness, but it doesn’t need to “push hard” on the workpiece.

Some people believe that cobots always provide less force than industrial robots. This is not always true — although it is sometimes true — but it is an understandable mistake. Cobots are designed in such a way that they will not apply harmful forces to humans co-workers. Limiting the force that they apply is one of the main ways that they do this.

However, just because a cobot has been force-limited doesn’t mean that it has weaker motors than industrial robots. The motors of collaborative robots can often provide just as much torque as a similarly sized industrial robot.

In fact, when you compare collaborative robots with industrial robots with similar properties, they come up looking quite similar.

For example, here is a comparison of the UR10e collaborative robot with three industrial robots with similar properties, comparing the wrist joint torques:

As you can see, although there are differences between the different robots, you wouldn’t be able to tell just by looking at their performance properties which is a collaborative robot and which are the traditional industrial robots. The only clear difference is the fact that industrial robots are 10x heavier!

In fact, at first glance the cobot (the UR 10e) appears to have a larger maximum wrist torque than the others. However, to be fair, these torques cannot be directly compared. It is very difficult to find ratings for the true maximum torques of industrial robot joints. It is more common to find the maximum “allowable” torque, which will vary in cobots depending on the safety limits.

In any case, the cobot has the ability to provide at least comparable forces to industrial robots of a similar size. As a result, cobots are clearly just as capable for sanding and polishing tasks!

How to use a cobot for finishing tasks

Since we released our Sanding Kit, it is now easier than ever to add sanding and polishing capability to your collaborative robot.

Check out the product page to find out more.

Do you have other concerns about cobot performance that we didn’t address here? Tell us in the comments below or join the discussion on LinkedIn, Twitter, Facebook or the DoF professional robotics community.