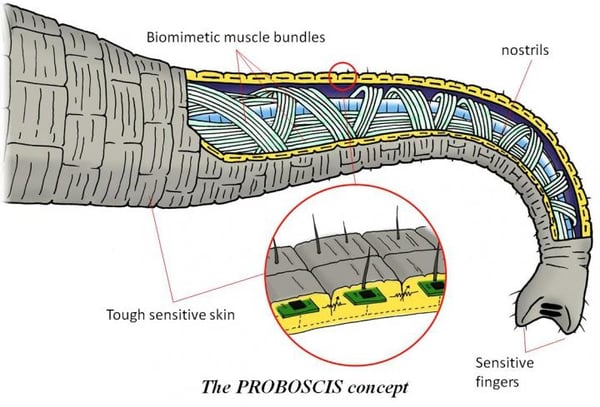 Good morning. In this week’s news mix: FANUC debuts new cobot, research sheds light on trust between humans and robots and THOMAS project comes to an end. We also encounter an elephant-inspired gripper design, admire a tree-planting drone project, watch a robot insect survive a squishing and much more!

Research published in Science Robotics this week shows that people trust robots more when the robot explains what it is doing. Using a cobot from Rethink Robotics fitted with a Robotiq gripper, researchers programmed the bot to report what it was doing in different ways and then showed it in action to volunteers. (UCLA has more.)

The researchers report that the volunteers gave the highest trust ratings when they were shown both the haptic and symbolic explanations. The lowest ratings came from those who saw just the text message. The researchers suggest their experiment showed that humans are more likely to trust a robot if they are given enough information about what the robot is doing. They say the next step is to teach robots to report why they are performing an action.

A gripper that never forgets? Strong, flexible and yet also capable of delicate movements (including grasping small objects without causing any damage) elephant trunks are one of evolution’s most fascinating productions. Inspired by their versatility, European Union-funded researchers are working on the EUR3.5m PROBOSCIS project, which aims to develop a new generation of elephant-inspired, soft robot manipulators.

The new robotic manipulator will have a body made by soft actuators with variable stiffness, sensitive to their own movements, and organised in a bioinspired architecture together with an advanced soft tactile sensing system able to provide the necessary information to the control algorithms […] the artificial trunk will be covered by an artificial skin with a mechanical structure inspired from the wrinkled elephant skin […] and the tip will be densely sensorized in order to guarantee a fine interaction with small and delicate objects.

New research has found that TuSimple‘s self-driving trucks use at least 10% less fuel than traditional, manually-driven trucks thanks to autonomous technology that manages the vehicle’s speed and acceleration.

One of TuSimple’s autonomous trucks in action. Credit: TuSimple

trucks were fitted with a black box that extracted driving data over a period of six months, which included 122 autonomous missions totaling nearly 6,700 miles, according to the San Diego-based company. Manually driven trucks were also fitted with the same black box technology […] The study found that fuel consumption between autonomous and manual driven vehicles at lower speeds has the most significant fuel savings because of the complex driving that happens at a lower speed.

Meanwhile, Canadian science and engineering graduates have developed a system that plants trees using drones. Dubbed ‘Flash Forest’ the system combines drones with specially-designed pods and an accelerated seed germination process. According to the team, their technology (which has launched on Kickstarter) can plant trees 10 times faster than a single worker and at a cost that is 80 percent cheaper than traditional tree planting methods.

The drone is fitted with a pneumatic firing device that fires planting pods into the soil at an ideal depth.
Credit: New Atlas

“We are a Canadian drone reforestation company that modifies drones to fire rapidly-germinating tree seeds into the soil,” says Flash Forest. “We merge technology, software and ecological science to surpass traditional tree-planting efforts and rapidly accelerate global reforestation efforts. With our ambitious goal of planting 1 billion trees by 2028.”

1. On Tuesday, NASA engineers took the Mars 2020 rover for its first test spin in the Spacecraft Assembly Facility clean room at the Jet Propulsion Laboratory in California. Engineers used the 10-hour test to check that all the systems are working together properly, the rover can operate under its own weight, and to demonstrate the rover’s autonomous navigation functions. Mars 2020 is expected to launch in July or August 2020.

2. Researchers at EPFL have developed a lightweight robot that uses soft artificial muscles to move at 3 cm (1.18 inches) per second. The new swatter-defying, insect-inspired robot can also recover from being crushed and folded. (H/T EPFL News)

3. The ‘Dynamic Locomotion’ research group at the Max Planck Institute for Intelligent Systems in Germany take inspiration from animals to help in the design of improved walking robots, prostheses and exoskeletons. In the latest in a series of videos showcasing the Institute’s work, we see how researchers seek to combine biomechanics with neurocontrol mechanisms to develop the next generation of dynamic robots.

4. The latest episode of Airborne-Unmanned brings you a roundup of the big drone stories from the past week.