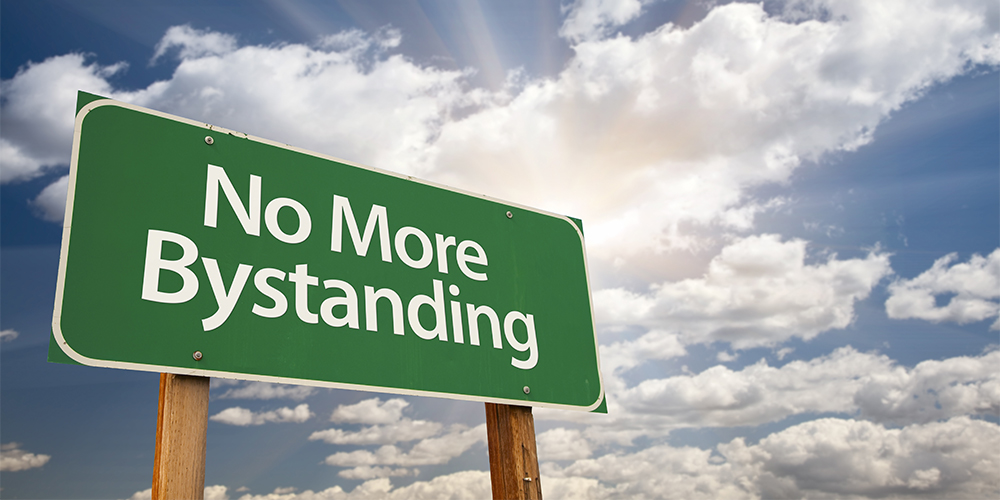 A teacher is seen abusing a differently-abled student. A child is being beaten unconscious by a group of other kids. A co-worker is being sexually harassed. It’s rush week for fraternities and sororities and you know there will be underage drinking.

Your answer probably is that you’d intervene in some way to stop it. However, research shows that if these types of incidents are witnessed by a group of people, individuals in that group are less likely to intervene. Crowds allow us to hide and be anonymous. If other people are not intervening, bystanders interpret the situation as non-emergent and don’t intervene. This is called “pluralistic ignorance” or “social proof.”

We believe someone else will take care of it. That’s called the bystander effect.

At this year’s Campus Safety Conference West, Kelly Charles-Collins will analyze examples of conduct witnessed by bystanders, discuss the benefits of bystander intervention, and explore the “4 Cs” for effective and safe intervention.

What is the Origin of the Bystander Effect?

In 1984, John M. Darley and Bibb Latané became interested in the bystander effect following the murder of Kitty Genovese. In the early morning hours of March 13, 1964, Kitty Genovese was on her way home from work. As she walked to her apartment, a stranger, Winston Moseley, who had followed her home, approached Genovese with a hunting knife. Genovese tried running to her door but Moseley chased her, overtook her and stabbed her twice in her back. Genovese screamed for help, “Oh my God. He stabbed me! Help me!”

Several neighbors heard her cries but only a few recognized them as a cry for help. One neighbor yelled at Moseley to leave Genovese alone, causing Moseley to run away. Genovese then crawled towards the rear entrance of her building out of the view of witnesses but did not make it inside due to a locked door.

Moseley, who had driven away, returned 10 minutes later. He searched for Genovese and found her in the back hallway of the building. Moseley then stabbed Genovese several more times and raped her. After stealing her money, Moseley ran away. Genovese was later found by a neighbor. Unfortunately, she died from her wounds.

Original accounts of the incident reported that 38 witnesses saw or heard the attack but none of them called the police or did anything to help Genovese. [That account has since been called into question.] Nevertheless, at the time of the incident, this story sparked interest and prompted inquiries into what is now known as the “bystander effect.”

Bibb and Latané performed experiments involving emergent and non-emergent situations to see how people would react when there was a crowd of people versus when people were alone. Other researchers have also done similar studies and replicated the effect. There was even an ABC primetime show based on the bystander effect called “What Would You Do?” In the show, actors portrayed situations (typically non-emergent) while the cameras captured the reactions and actions of innocent bystanders. Situations included a child being mistreated, a man putting something in a woman’s drink, cheating on a test, racism, homophobia, or an elderly person shoplifting.

What researchers and television producers learned is that in emergent and non-emergent situations, people were less likely to act when other people were around. Indeed, the more people that were present, the less likely others were to act.

Why Do Some People Act and Others Don’t?

Studies show what we choose to do is based on many factors, including:

A. fear: of the unknown, for their personal safety, retribution, judgment, death;

B. ambiguity about the situation or the environment;

C. affinity or cohesiveness: some relationship or connection between the victim and the bystander; and

D. diffusion of responsibility: leaving the responsibility to others to act. This is sometimes based on the thought that others are more qualified to act (e.g., doctors or police officers).

It is important to note that being a bystander is not limited to physically violent situations. The bystander effect is also present in schools, the workplace, and on the internet around issues of discrimination, bullying and harassment. Bystanders in these situations are also hesitant to act or feel no pressure to act for several reasons, including fear of loss of important relationships, retaliation, bad consequences, ostracization, ignorance, and complicity.

We all want to believe that if we see something, we will say or do something. Raise your hand (don’t cheat) if you have ever seen an incident on television or social media or read about something and said, “If I was there, I would have done this or done that or said this or said that.” I have. My hand is raised high.

But would we say or do something if we saw something?

Researchers not only studied how people reacted when others were around but their decision-making process about whether to act. They found that bystanders engage in a 5-step cognitive process: (1) notice, (2) interpret, (3) decide, (4) choose, and (5) implement.

Related: How Bystanders Can Use Med Tac Training to Save Lives

Generally, when we encounter situations, our gut reaction is to do something. The problem is that we likely don’t know what that something is. We also fear for our own safety, are concerned that we might make matters worse, or we might get sued. All of those are valid concerns.

However, we have the power to choose how we will act and to what extent we are capable of doing so. We cannot all be heroes that swoop in to save the day. But we also cannot all be bystanders who stand by and do nothing. We all have limits that control what we will and will not do. My limits are doing nothing on one end of the spectrum and death on the other. However, there is so much room for action between nothing and death.

During my session at Campus Safety Conference West, we will do a deep dive into the factors and decision/making process about why some people act and others don’t. But even more importantly, you will discover my “4Cs for Safe Bystander Intervention:” connect, create, call and capture.

The post Bystander Intervention: Don’t Just Stand There — Be Empowered to Do Something appeared first on Campus Safety Magazine.